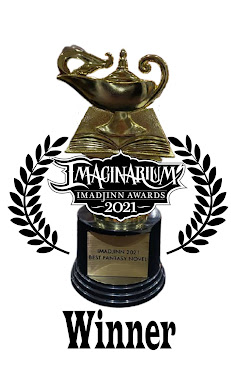 The Imaginarium Convention is in the books for 2021. What a great conference and wonderful people! If you've never tried this writing conference, you want to check it out.

Back in March, I ran a google search for fantasy conventions near me. "Near me" is an interesting search term , because Imaginarium occurs in Louisville, Kentucky--a six hour drive if traffic isn't an issue.

Their website really impressed me, and a few weeks after I applied, they invited me to be an author guest. From start to finish, this was an amazing conference and not only because I won an award. (More about that in a moment.)

This regional convention brings in writers, authors, film makers, scriptwriters, and then some. It was great to teach a few writing workshops and sit on panels with people like F. Paul Wilson, Richard Knaack, Steven Shrewsbury, Cassandra Morgan, and Michael Knost.

On Friday night, I joined Paul, Steven, and Michael as well as four other professionals on a panel called Books and  Bourbon. I expected a literary cocktail hour where we talked about books with the attendees. We-lllll, it really wasn't that. The questions centered around drinking. I don't drink often or very much, so my tales of the brief period when I did eons ago didn't hold a candle to some of the others. When I admitted I'd never tried bourbon, a shot was passed down the table in a heartbeat. It is bourbon country after all. I took a sip and thought my throat just might close up! The rest of that shot went to Stephen Zimmer, who with Holly Phillipe is the heart and soul behind Imaginarium and Seventh Star Press.

I taught three workshops and sat on two more panels over the weekend. I thoroughly enjoyed each one and can't say enough good things about the people attending, participating, and running this conference. Watch for upcoming posts with tips and notes from my workshops in the weeks to come! 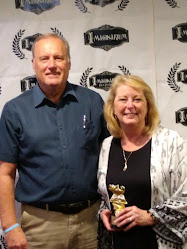 Hands down the most exciting part of the weekend, for me, came on Saturday night. The Watchers of Moniah was a Finalist for the Best Fantasy Novel Imadjinn Award. I wasn't holding my breath because when they announced the nominees a few months ago, they said it was hard to narrow the long list of fantasy submissions to four, so this year there were five finalists. But...

The Watchers of Moniah won!!!!

I can't tell you how validating and humbling this honor is. If you've followed me over the years, you know I received many, many, many rejection slips for this book. Thank goodness I kept plugging on!

If you're interested, you can watch a quick video of my acceptance.

And to make this weekend even better, my husband, Bruce, attended this conference with me. He stayed home with the grandchildren for all of the others, but thanks to our son and daughter-in-law, the grands got to spend a few days with them and he came with me.

With no grandchildren to slow us down, we decided to spend a couple of extra days sightseeing. We visited Churchill Downs, The Kentucky Derby Museum, and Rock City in Chattanooga-just the break we needed.

Oh, and Imaginarium, if you're listening, please invite me back next year!

Special thanks to Bill Webb, Science Fiction Novel Imaginarium winner,
for the graphic of the trophy and the winner laurel!