Giraffes, Rhinos, and Impalas Oh My!

- June 08, 2010
We all know what can happen on a three hour tour thanks to Gilligan’s Island. Luckily, for us, our three-and-a-half hour tour gave us lots of excitement but not of the shipwrecked kind.

Last week, my husband and I traveled to California where we visited the San Diego Wild Animal Park. Two years ago, we visited the park, but I wanted to go back. Why? Because, silly me did not go on the photo safari last time. I’ve regretted that decision ever since.


So, off we went, to the park, with one plan in mind—take the photo tour so I can see and feed the giraffes. 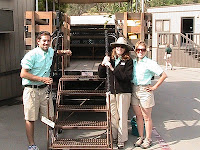 San Diego Wild Animal Park offers three different photo safari tours. We opted for the three-and-a-half hour one AND discovered that no one else signed up for that tour, but us. Imagine! Our own private tour guides and driver. Three people to take care of little old me and Bruce. How about that?
We quickly learned that one of our guides, Vicki, likes giraffes as much as I do. How cool was that? We talked giraffes and I experienced a lot of envy over her incredible job.

The Wild Animal Park has over twenty giraffes and we fed three of them: Maliki, Willow, and Ykeke. These tours provide acacia leaves to feed the giraffes, and we didn’t have to share with ANYBODY. I even let Bruce feed the giraffes a few leaves! The guides taught us how to feed them so their large heads wouldn’t knock us over. A male giraffe’s head weighs eighty pounds! That’s some serious head butting material. I wanted to pet Maliki, but giraffes don’t like people to touch them. Except for occasional contact with their super long raspy tongue, I settled for being up close and personal. Incredible. Surreal. Funny. Joyful. Awe-inspiring. These words don’t come close to the significance of this experience.
We fed apples to rhinos, which lumbered up next to the truck. We stood over them and dropped the apple pieces into their cavernous mouths. Rhinos will let you touch them, and I discovered that their hide felt tender and soft. Don’t try this at home, though. They played nice because of the apples and the fact that the truck kept us above them. I wouldn’t want to come face to face with one on the ground!

The park hosts various herd animals, each with its own distinctive, yet beautiful markings. We watched an oryx male, intent on love, pursue a female all over the grounds. Our guides told us that the females make the males chase them for long periods of time to ensure that the male possesses great stamina. She eventually relented, but she chose a difficult spot for the poor guy, and we left him still trying…

We saw the offspring of such behavior everywhere. Many mother animals tuck their newborns in a valley or a depression for safe-keeping while she feeds. We learned that the keepers spent hours the day before trying to locate a newborn Impala calf because its mother tucked it so well. When we stopped to peer at an Impala calf tucked into a drain pipe, Vicki spotted a newborn Impala lying beside its mother. Imagine our surprise when the Impala stood up and finished delivering her calf right before our eyes!

We also witnessed one Transcaspian urial lamb standing on a rock outcropping harassed by two crows. Our guides told us that one bleat and mama would come running. They were right, mama rushed to the rescue followed by the rest of the herd. Amazing.

The rewards of this trip nestle in my heart and memory (and video files) forever. We saw so much more than the typical tour, I can’t help but wonder at this blessing.

Special thanks to our guides Vicki and Amanda, and our safe driver Tim, for an incredible experience. We will never forget it or you!

Anonymous said…
Wow - the miracles of life! I've seen a regular "calf" being born here on the farm and it is amazing.

Tank said…
That is awesome, sounds like a great trip! Hope you are doing well, I think its been 6 months since we have sen each other! Ready to schedule a lunch? or to bring Victoria over for a swim with the kids?
June 9, 2010 at 7:51 AM

And you got to feed your beloved giraffes. I bet you wanted to just sit down and watch them awhile, learn more about them.

Anonymous said…
That was absolutely breath-taking.....how lucky and blessed you were to be a part of such a miracle.