Showing posts from May, 2011
Show all

We entered May with one major event on the calendar:  our youngest son's, college graduation.  Aside from Mother's Day and the dog's annual veterinarian visit, Nathan's graduation stood as the sole event of the month. G raduation went off without a hitch, and Nathan entered the world of the hopefully soon-to-be employed. But, our dog's vet exam turned into two, the second one an overnighter.  Doggie medicated (think $$$$), we looked forward to a relaxing Mother's Day weekend with my daughter, Tisha, and granddaughter, Victoria.  During that weekend, we visited our son and daughter-in-law, Chris and Haley.  The girls wanted to compare their pregnant tummies: Haley due June 9 and Tisha due June 27.  On Monday, Tisha returned home. ﻿﻿﻿ Three days later, Tisha headed for the hospital in premature labor.  Thankfully, the doctors managed to stop her labor.  June 27 was too many WEEKS away. All of this paled in comparison to the next event: Haley's water br
8 comments
Read more

Facebook's Effort to Save Your Friends 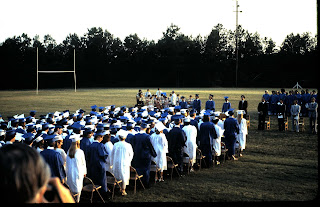 I just found this status posted on a friend's Facebook page: URGENT WARNING! Facebook now automatically scans your brain through your monitor. To block the scan, go to the kitchen, get aluminum foil, and wrap it around your head. Stay calm and breathe through your left nostril ONLY. This is a SERIOUS problem and has been confirmed by a friends cousin's girlfriend's neighbor's son's baby's mama and her pet chihuahua. Copy and paste as your status to SAVE YOUR FRIENDS! As I read this post, I began to giggle.  Why?  I SAW my friend actually doing this.  Yes!  The image of her sitting at a kitchen table, exhibiting her quiet demeanor while she patted in place the aluminum foil wrapped around her head like a conehead.  Then I hit the line about breathing through your left nostril only.  My friend, head covered like a 1960's style aluminum beehive, laid a finger aside her right nostril and breathed as directed through the left one.  (Yes, Valerie, dear friend,
4 comments
Read more

- May 04, 2011
The circus, under the big top, three rings of adventure...I gazed upward in awe, enthralled by the young woman sailing above me on the largest swingset I had ever seen.  I wanted to be her.  I was ten. Time stopped for me during that trapeze act.  She performed stunts and acrobatics with ease and grace. Her body flew forward and back, accelerating, until she flung herself into the air, reaching toward her partner.  I wanted that freedom. When people asked me what I wanted to be when I grew up, most of my answers were typical--school teacher, nurse, model--but for a few years I told them a trapeze artist.  That fixation usually turned a few adults' heads. I still love high thrill adventure (see this previous post: She Flies Through the Air ).   I'll never fly on the trapeze, and I'm OK with that.  I found other dreams to pursue. The one dream I never gave up on was to be a writer.  I work on this every week.  It will happen.  I believe it.  I refuse to accept anythin
11 comments
Read more
More posts