Showing posts from January, 2011
Show all

- January 25, 2011
When warriors gather the enemy becomes anxious and plots a counter-strike.  The strategy might be to beat them to the punch, infiltrate the troops, or even attack while they sleep.  I experienced this first-hand at the Christian Communicators Conference this past weekend, a gathering designed to equip women to provide encouragement to others through the gifts of speaking and writing. On the second night, our facilitators, Vonda Skelton and Carolyn Knefely , danced off to bed in excited triumph.  The day's sessions proved that the women assembled in this lovely lakeside home held the power of the Spirit in their hearts and could truly minister to other women. Then the enemy struck. He chose to sneak into our camp at night and destroy with doubt and fear. I struggled with my own shortcomings, uncomfortable with my abilities when measured against the phenomenal women gathered in this house.  In no way did I believe I could stand up and share my love of the Lord with the same k
5 comments
Read more

Brief and To The Point

- January 18, 2011
Tuesday only has a couple of hours left, so I'm getting this post in under the wire.  I'll be off the internet grid for the next five days, so I've been getting ready for the lack of technology.  Should be a good thing.  Really! Anyway, I'm headed for the Christian Communicators Conference tomorrow morning.  I'll spend five days with other like-minded women, working on my writing and presentation skills, and learning how to develop the business side of public speaking. I know it's ironic that I'm leaving for a communications conference and submitting a very brief post this week, but that's how it goes sometimes.  Hopefully, next week, I can enlighten all of you with the wonderful new knowledge I will most assuredly obtain this week. Until then...
Post a Comment
Read more 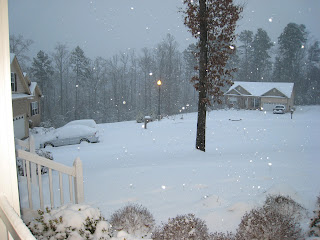 The snow storm of the south made big news around here yesterday, but I have bigger news to share.  So forgive me if I ignore the wintry white beauty outside my window while I tell you about one of God's other great blessings. In June, Bruce and I will become grandparents again ... twice!  No, not twins, even thought that was a possibility.  Our daughter-in-law, Haley, is due in early June.  This is a first baby for Haley and our son, Chris, so it's pretty exciting.  They told us at Christmas, then put us under gag order until this past week so they could tell the rest of the family and friends.  We're excited, but I must admit a few years ago, I couldn't imagine Chris as a father.  He avoided holding babies like the plague!  Luckily for him, Haley works as a nanny and has tons of experience with babies... which means, he now has a lot of experience, too. But that's only one baby, right? Our daughter, Tisha is due in late June!  How about that?  Two in the same
5 comments
Read more

- January 04, 2011
If you’re like me, you received a few end-of-the-year letters from your friends. You know the kind. The one where they tell you about the past year. In my experience, there are three categories for these letters: fascinating, fun, or full of oneself. My uncle used to write one that entertained while it informed. His sense of humor made it easier to swallow the cheesy parts. One of my cousins took up this practice a few years ago. Bonus! Her letters are NOT cheesy, just filled with fascinating information. A friend of mine writes this type of letter, too. I chuckle through it because she doesn’t take herself seriously. Another friend sends us an end-of-year poem. In one page, he contrives to give us a quick update on everyone while exercising creative wordplay. I fail miserably as a poet, so I admire this imaginative approach. Then there is the “my kid’s better than your kid” letter. The whole family excels at work, school, play, and volunteering. Watch out, one of these days
6 comments
Read more
More posts