Things My Dad Gave Me

- June 19, 2010
My Dad and I rode the chairlift at Tweetsie, our legs dangling in the air. Dad clung to the bar that separated us from the plummet below and did his best to restrain me as I kicked my feet and leaned over exclaiming, “Look, we can almost touch their heads with our feet!” I stared in fascination at the people below us. 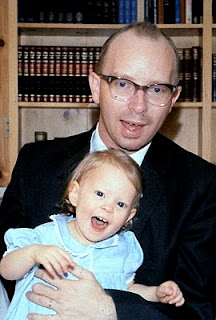 This story—Dad clinging to the bar, fighting his terror in order to keep me in my seat—has entertained our family over the years. He shared this ride with the only child he raised that did not share his fear of heights. I recall the ride but nothing of his fear. I was five.
Over the years, I learned of other facts that he managed to conceal, hoping to not affect our outlook on life.

Questions about his missing finger received a simple answer, “It got shot off in the war.” He fought in World War II, and a bomb exploded beside him causing extensive damage. He received a Purple Heart and the Bronze Star. As children, we knew his finger got shot off. That’s it.
I hated to practice the piano because it sat in our large, dark basement. If someone else joined me, I was fine, but practicing alone in the basement raised the hair on the back of my neck. For years, Dad assured me that nothing lurked in the dark. In my thirties, I learned that the basement created the same discomfort for him.

Dad kept these thoughts from his children, giving us the gift to explore and learn about the world in our own way. Instead, he shared what he loved with us.
We grew up familiar with the lens of a camera, groaning good-naturedly as he set the timer and rushed to join in the picture. At birthday parties, he told my friends to say “physicist” rather than “cheese.”  A definite giggle producer. Try it with a few teeth missing!

When I was twelve, Dad and I spent time on the golf course—one of the rare times that I got him to myself. I don’t recall anything significant about those outings, just being thrilled to be considered worthy enough to play with Dad.

In the third grade, I developed a fascination with snowflakes. Dad checked out a book on snowflakes from the university library and sat beside me while I struggled to read the thick volume, praising me as I sounded out difficult words. That same year, he let all four of us take a physics test he gave his college students. I got a 36, a better score than some of his students. Years later, I took his physics class and discovered his talent for explaining difficult concepts. He gave tests with questions like how far off of the ground Superman might be when he saves Lois Lane (whom Lex Luther just shoved off of a ten story building). How cool is that?

Outside of his family, one of Dad’s biggest joys probably was trains. I remember trudging after him, unable to grasp his excitement until the promised train arrived—usually a steam engine. It seems like we waited forever, staring down the tracks, thinking the train might never arrive. It always did, and yes, Dad took lots of pictures.

Most people knew my Dad as a physics professor who became department head and then college dean, but to me, he was Daddy. He’s been gone for five years, now, and I miss him every day, but I’m thankful that he shared so much with us. I just wish he was here today so I could tell him Happy Father’s Day.
family

lee wylie said…
i remember your dad too...and he was a wonderful man. it's so hard, not having them here with us to share in our daily life's joys and struggles. i'm so happy my daddy got to know and love my children and that they have many vivid memories of him. i also relished every minute i could spend alone with daddy-same as you and your dad. you and i were both blessed with wonderful, loving dads. God bless and thanks for the memories! lee
June 20, 2010 at 8:31 AM

Anonymous said…
Dads are wonderful people, aren't they? I am sure of all his treasures, he counted the love and admiration of his daughter as one of the greatest gifts.

Anonymous said…
That's lovely, Barbara. I may have met your dad since I was a physics brat, too, but I'm afraid I would have been extremely young and inattentive. -- Konni
June 20, 2010 at 1:51 PM

Barbara V. Evers said…
Lee, you're so right. We were blessed to have great fathers and to know each other's father so well.

Konni, yes you knew Dad, but you probably didn't have much reason to recall him. I got to know your Dad after becoming an adult, and I feel blessed to have known him.
June 20, 2010 at 2:51 PM

Tanks for the Memories said…
Makes me feel pretty lucky that my Dad is still here on this earth! That and my 4 grandparents! Thanks for sharing!
June 21, 2010 at 8:18 AM

Bob Strother said…
My Mom and Dad were divorced when I was very young, so I didn't know him very well. You were lucky to have such a fine father and to make such great memories with him.
June 23, 2010 at 5:55 PM

Heidi Cox said…
I miss Grandaddy every day too. I have a specific memory him reading to me. It was a story about a steam engine and a diesel train. They didn't like each other at first but somehow learned to work together. He'd read it many times before but I remember sitting in his lap in his study. I was so excited to help him turn the pages. :))
July 1, 2010 at 6:50 PM

First things first: I am not much for reading blogs, however, the one on your Dad got my attention and I read it.

Third: I miss him too. His somewhat raspy voice, his shy smile, his serious, but calm demeanor. ( I always suspected that there was a temper back there somewhere if he chose to let it out) and, of course, his pure brilliance.