- July 20, 2010
Don’t let my blog title fool you today. Yes, I care about the environment and animal welfare, but the pandas I refer to currently reside on my dresser.


Last night I dreamed that I was contributing to two donation circles. I’m not sure why the items needed to fall into the circles, but they did. Anyway, I dropped a wedding gown in one and firewood in the other. I felt nothing during those two decisions. Note, it was NOT my wedding gown since it was white and mine was peach, so don’t start analyzing that part. 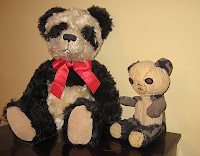 Anyway, the next thing I grabbed to drop into the donation circles was my two stuffed pandas. The smaller one, Teddy, has been with me as long as I can remember. It belonged to my sister first, and she gave it to me when I was small. Teddy doesn’t have any fur left, but I think that’s my sister’s fault, not mine. Over the years, he’s been re-sewn and washed many times. I asked for the larger panda a few years ago at Christmas. He came from the Bombay Company store in the mall and reminded me of Teddy. The two live together on my dresser.
So, the moment I dropped the two bears into the circle, a great remorse swept over me. I stepped forward to save them and something fell from the sky and exploded on the ground in front of me. I jumped back wondering if the explosion meant something. Was it judgment for depositing my pandas? Was it an attempt to prevent me from saving the pandas? Did my decision to pull the pandas out of the circle save me from being hit by the explosion?

I rarely remember my dreams and the details of this one are fading quickly from my memory. I don’t believe in dream interpretation, but this one stuck with me throughout the day. Why? I’m guessing sometime in the near future I’ll find a way to use it in a story. Many of my stories do come from my sleep-infused brain. In fact the main plot of the novel that I’m trying to get published appeared to me first in a dream. The story itself is far different than that dream, but it provided the seeds to what eventually became a 103,000 word novel.

Now if I can just get an agent and editor to agree that it needs to be published!
animals inspiration writing

Bob Strother said…
I get lots of story ideas after my first glass of Chardonnay and then lose them after the third. As a child, I had a stuffed elephant I called "Snout-Snout." Nowadays, I shy away from all things elephant-related.
July 21, 2010 at 8:16 AM

Valerie said…
Dream plots, eh? Not me. Mine seem to be of the "horrific public toilet" or "evil squirrel" variety. Not sure the world is ready for a novel about either.

But yours--I could have a good time interpreting that one! The wedding dress, the firewood, the pandas, the explosion... Much fodder for discussion, most of it ignorant since I neither know anything about dream interpretation, nor believe it in. But it would be fun!
July 25, 2010 at 9:12 AM

Barbara V. Evers said…
Hmm, so I'm not the only one who has the evil public toilet dream? I dont' believe in dream interpretation either. but the toilet one usually means I need to wake up and go use the bathroom!
July 25, 2010 at 3:05 PM