The Mental State of My GPS

- September 07, 2010
I think my GPS suffered a nervous breakdown this morning.  That's the only explanation I have.  I turned it on when I got in my car and keyed in my destination address.  Once he (yes, my GPS is a he) found the satellite, he showed my car four-wheeling through fields.  He kept telling me to turn on to the road that I was already driving on!  When that didn't work, he told me to turn on a road that was two streets over.  According to him, it was three hundred yards ahead on the left.
I guess the symptoms have been there.  Last January I nicknamed him Bossy Aussie for the way he kept yelling at me: 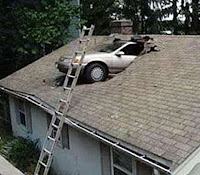 Ok, maybe he didn't say that last one, but he did start making imperious demands.  Do not pass GO.  Do not collect $200. All I did was make a detour to Starbucks, sheesh!

Then, a month later, he started taking his time finding the satellite.  How hard can it be? Clear sky, familiar territory, but he just can't find the stinking thing.  Good grief.  By the time he deigns to find our location, we're not there anymore.

Maybe it's my fault.  Maybe I shouldn't ask him for directions and then ignore him.  But let's face it, he doesn't always choose the best route.  Sometimes, he sends me through lots of traffic.  Or off on some strange road.  Gotta ignore that, right?

I guess it might be because he doesn't know where he lives.  What can I say?  My husband pointed out that it's not smart to save our actual home address in the GPS, so I saved a spot nearby, so any would-be car thieves will only find a field, not my home.  So poor Bossie might be confused. Why do I wake him up somewhere else? Does he think I'm a bad influence, not sleeping where he KNOWS our home must be?

Maybe it's an ego thing.  I did use the GPS on my cell phone once or twice, but only because of Bossie's "locating satellite" issues.  It's nice to get the directions before you've gone too far out of your way, right?

But I came back to Bossie Aussie.  I like his voice.  His screen has a little meat on it, as opposed to my skinnier-than-thou phone with its small print.  Bossie and I have traveled so many roads together.

I guess I should probably stand by him during his darkest hours.  Maybe tomorrow I'll let him make a few U turns, too.

Bob Strother said…
I haven't had the strength to analyze mine, I'm just overwhelmed by her British accent. God help me, I'd follow her anywhere (and have).
September 7, 2010 at 8:15 PM

Rebel Fan said…
Thank the Lord I have excellent navigational skills. Never used one, don't intend to.
September 7, 2010 at 8:49 PM

Susan M. Boyer said…
Bob, you have a thing for accents. :) Babby, I think I'd send Bossie in for a tune up. Or possibly toss him out the window. We have one (I use the British accent, too) that sometimes does screwy things, but since the new car has a built in system, the Garmin has been assigned to Sugar for use with rental cars. She behaves better for him.. :)
September 8, 2010 at 9:06 AM

Valerie said…
My GPS give us some strange directions, too. We sometimes make wide by-passes to end up on a road we would have hit if we'd traveled 500 feet farther. I haven't paid to update its maps because that costs nearly as much as the GPS did in the first place. we've decided to just get a newer one. But in the meantime I keep using it, because even with all its idiosyncracies it's a million times better than relying on my sense of direction. (Me, the person who turns the wrong way every time I come out of a restaurant bathroom.)
September 9, 2010 at 9:35 AM