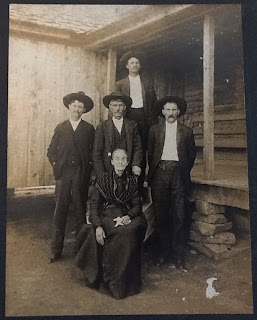 As I embark upon this new year...well, embark probably isn't the best word, more like:  as I trudge into a new year.  Yes, I said trudge.  Let's face it, 2012, for me, just wasn't a year I'd like to repeat any time soon.  Although it wasn't a stellar year,  I learned some valuable lessons.  Some are not the kind you want to learn, but we don't usually get to choose the lessons the Lord sends our way, do we?

So, without further ado, Barbara's lessons from 2013:

1.  If there's something you want to do in your life, do it, don't let things get in the way.
I call this the bucket list lesson.  In late January, my mother fell.  Many of you know this and are aware of the trials this presented to my family.  Mom was fully independent prior to her fall.  She played bridge a minimum of four times a week and usually was the driver for her friends who no longer could drive.  The fall caused severe damage to Mom's brain.  Although she didn't have a stroke, the result was as if she had a hard stroke.  Today, she lives in a nursing home and is what they call maximum care.  What does that mean?  Someone does everything for her.  She has to be fed, dressed, gotten up, turned, etc.  Mom is still alert and aware, but she struggles with speaking.  Some days, she gets a sentence or two out, others, we rely on body language to understand her.  You never know when this might happen to you or someone you love, so don't waste a moment of your time.

2.  Organize and clean up your belongings so your children will know what's what if you're not there to tell them.
The day before Mom fell, she closed on a small house in a retirement community.  We pushed for her to do this for several years, and she finally agreed to let go of her 4000+ sq ft home and downsize into something manageable.   She had 40 years of belongings stored in her house, and we looked forward to helping her weed through it all.  The problem?  She fell and couldn't tell us what was what.  It took months to go through it all.  We never knew what we might find when we opened a drawer or closet.  It was exhausting, and Mom couldn't tell us the significance of anything.  As we found family pictures, we set them aside.  One day, we decided to separate them by mom's side of the family or dad's.    That's when we ran across the picture in this post.  It took some work, because nothing was written on the back, but we finally found out from an uncle that the woman in the picture was our great great grandmother.  He couldn't tell us the names of her sons in the picture, but he did share a later picture of this woman that included our great grandmother.  We got lucky with that one.  Someone could identify it for us.

3.  Most old stuff is just that old stuff.
Nobody wants your old LPs (for the most part) because my mother's generation is finally letting them go.  That means the market is glutted with more albums than record players.  There will be the occasional LP that's collectible, but when your parents collection is 500+ records, finding it is like looking for a needle in a haystack.  Same goes for books, silver, furniture, etc.

4.  If there's something you don't want your adult children to see, get rid of it while you can.
I won't tell you what led to this revelation.  Let's just say, we laughed about some things that were, at the same time, a little disturbing.

5.  Nursing homes are fun places to visit and usually worth a laugh or two.
Who knew?  Most people think of nursing homes as depressing places.  I visit Mom almost every day and have come to know many of the residents.  Some of the funniest things I've heard this year came from them.  You can check out this blog post for a story about one of my favorite residents.

6.  Never give up on your dreams.
Not everything this year has to do with my mom's declining health.  I attended two writers' conferences and came away with positive responses to my work.  Also, one of my short stories was published in an online journal this year.  I actually got paid for that one!   Even thought it's not my first published story, previous publications paid in contributors' copies.  Then, I learned that a short story of mine made the semi-finalist list in Pirate Alley's 2012 Faulkner-Wisdom competition.

7.  You have to let some things go.
Before Mom's accident, I felt like I didn't have any free time.  Actually, I didn't.  Since then, I've found time to spend with my mom almost every day.  That means I had to let some things go. When you juggle several balls of the same size, it's not much of a problem.  Add a large, disproportionate ball and you'll drop some of the smaller ones.  You have to pick and choose what to juggle.  Some things are just more important than others but be sure you don't drop the ball on other people who are important to you, too.  You may have to find new, less involved ways to spend time with them, but make sure you keep them in your life.

8.  Never think you aren't affecting others (and be sure to thank those who have affected your life, too).
A former student found me on LinkedIn this year.  She told me she had been looking for me for years.  I taught her in a 12 week welfare-to-work training program in the early 90s, so I was amazed that she tried so hard after so much time had gone by.  She told me that she never forgot the lessons I'd taught her.  In a tough year, this was more of a blessing to me than you can imagine.

OK.  So there's eight lessons.  There are plenty more, but I'll stop here.

What lessons have you learned this past year?
family holidays

Anonymous said…
All of this is so very True and important to embrace! We are not promised tomorrow and yet we live like we will never get sick or lose a loved one..... Denial.

Michael Offutt, Phantom Reader said…
I went through some of this with my parents. They are aging and getting to a point that an assistive living facility is right around the corner. I discover things in their home that they might not have wanted me to find. Oh well. They're reading my books so it's not like they aren't getting the same experience with some of the more sexual scenes I write.
January 3, 2013 at 12:33 PM

Bob Strother said…
Vicki and I have been through much of the same in recent years, and I agree with your thoughts--especially about doing those things you want to do. I'd rather spend my time and money making memories with my kids and grand kids than worrying about leaving them a substantial financial legacy.
January 3, 2013 at 2:52 PM

Barbara V. Evers said…
Misty, I think a lot of people are in denial and don't even know it. One of the reasons I'm sharing these points now. Michael, it's true that our writing often shares more of ourselves than people might expect, but at least we know we aren't always what we write. Which is a good point for you Bob. I agree that spending the time now making memories is so much more important than financial gain. One of the things I will never regret is the time I spent with my parents. I always found time for them.
January 3, 2013 at 5:48 PM

Lissa Clouser said…
A beautifully written post with lots of good reminders for us. I hope that 2013 has many more positive things in store for you!
January 16, 2013 at 1:02 PM

Valerie Keiser Norris said…
Somehow I missed this post--sorry! I love that someone you'd inspired in the past found you. See, you're making a good difference in people's lives. What a legacy!

I know how hard you've worked this year to stay connected to your mom, even with her limited capacities, and how much it took to go through all her things with your siblings. This year hasn't been any easier, has it?