Helen of Troy, The Early Years


Her face launched a thousand ships and instigated a horrific, ten year war between the Greeks and Trojans.  In legend, Helen of Troy is no more than a pawn, used and/or abused by men.  Men fell at her feet seeking her hand in marriage or kidnapping her in order to own her famous beauty.  But somewhere within this story lies a woman who lived these events and found the courage to rebel against Menelaus and flee with Paris to Troy.


Where did that rebel come from? 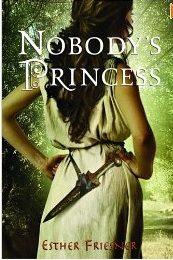 That’s the question Esther Friesner explores in her YA novel, Nobody’s Princess.  In Friesner’s account, we meet Helen as a small child, excited and enamored of the goddess Aphrodite.  She wanders through childhood aware of her beauty. How can she avoid it?  Everyone comments on it.  When she escapes deserved punishment and her sister Clytemnestra suffers for it, Helen begins to understand the power wielded by her beauty.

But Friesner seeks to develop a full character, unlike the flat person portrayed in legend.  Adolescence strikes Helen.  The adoration for her beauty disappears.   She overhears comments about her lanky plainness, speculations on whether she will  outgrow this stage and become a beauty as her mother, Leda did.

Robbed of the power beauty provided and bored with the work of women--embroidery and sewing-- Helen seeks to learn warfare on the sly.  Her efforts, assisted by a variety of interesting characters, draw her into a myriad of adventures.  Men still pursue her, but she no longer believes she is beautiful, so their flattery strikes her as boorish and amusing.

Friesner’s adept storytelling delivers a young girl convinced that her only avenue, as the queen she’s destined to become, is to learn how to protect her kingdom, Sparta, through her ability to fight.  This obsession drives her to do the unthinkable, and so, appear in unusual places, often in disguise as a boy.  Imagine that!  The most beautiful woman in the world hiding under plain sight dressed as a serving boy.

During her adventures, Helen participates in the Calydonian boar hunt alongside her brothers and longs to join the search for the Golden Fleece.  She visits Delphi, and attempts to avoid the Oracle since she already knows her own fate—rule Sparta.  But the Oracle finds her and lends her own power to Helen’s pursuits.

All in all, this is a fun tale, rich in speculation, and continued in a sequel, Nobody's Prize, placing Helen on The Argo in search of the Golden Fleece. If I had one complaint, it would be that the genre and voice is YA.  Not that I object to YA, but it's hard to imagine the Oracle of Delphi giggling, but Friesner chooses to introduce her as a sixteen-year-old girl, so giggling probably fits.  It is refreshing to see Helen as a woman doubting her own beauty and desiring something other than the expectations of her birth.

In the Author's Note at the end of the book, Esther Friesner points out that Spartan women who lived a thousand years after Helen were trained to defend their homes.  She decided to show Helen as the predecessor to this decision. So, what are your thoughts? Would Helen learn to fight and seek out adventure?


Note to my regular blog readers:

This is my January entry in the Worlds Without End 2013 Women of Genre Fiction Reading Challenge.  Each month, I will submit a book review from a woman author, whose work I haven't read yet, in the Fantasy/SciFi genre.  I hope you will check out other participants' blogs, too.
books fantasy

Steve Gordy said…
Sounds interesting. Perhaps I should recommend it to my students during those terms when I teach Western Civilization in Ancient and Medieval times.
January 24, 2013 at 7:01 AM

Barbara V. Evers said…
Steve, it might prompt some interesting discussions, especially since other well-known characters show up in the story. Let me know how it goes if you choose to do so.
January 24, 2013 at 9:10 AM