Songs of the Earth: A Book Worth a Second Chance 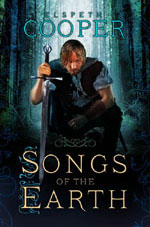 Beaten to a pulp, only able to stand by sheer will power, Gair faces his accuser, the church, the very institution he had served as a Knight for the last ten years.  His crime?  Witchcraft.  The problem?  He didn't plan to use magic, the song of the earth found him at age eleven.  Once he experienced the thrill of the song, he couldn't ignore it even though his upbringing taught him of its evil.  And The  Book of Eador leaves no doubt to his penalty:  Suffer ye not the life of a witch.

Forces beyond Gair's understanding are at work, though, and the Preceptor sentences him to branding as a witch and orders him to leave the city gates before sundown never to return.

Did I mention he was beaten to a pulp and unable to stand?  Then, of course, there's the branding that came next.  Sundown approaches, and a mysterious stranger takes Gair under wing.  As an angry Elder pursues Gair determined to carry out a sentence of death, the stranger helps Gair escape the city.

What follows is an entertaining voyage across many leagues while Gair learns about the song and begins to recognize its beauty rather than its taint.  His ability is strong, stronger than the stranger has seen in years, and it attracts notice, good and bad, catapulting Gair to the forefront of a world about to be torn by war.

When I first heard about Elspeth Cooper's first novel, Songs of the Earth, I counted the days until its release.  Her book trailer hooked me before the book hit the shelves.  When the book came out, I downloaded it and began to read.  After the first few chapters, I stopped, disappointed in Ms. Cooper's first efforts.  Thanks to Worlds Without End 2013 Women of Genre Fiction Reading Challenge, I gave the book another chance.

What stopped me the first time? Just a few chapters in, I stood with Gair as soldiers and the Elder's witchfinder surrounded him.  No way out.  I turned the page, and ... no Gair.  A new person emerged with a story far less exciting than Gair's predicament.  This was the second time a point of view change had thrown me out of the story.  The first one came in the first chapter as the mysterious stranger observes from somewhere secret (!?) the sentencing of Gair.  Later, we learn this person's gender and name, but we spent half a chapter unsure who he was. Yes, it's a first book, and yes, one of the cornerstones of epic fantasy is the changing point of view.  But, the shifts jarred me, and not in a good way.  So, I stopped reading.

I'm VERY glad I picked Songs of the Earth up again.

On my second attempt to read Songs of the Earth, I knew what to expect, so I no longer felt the cold water shock of a new storyline.  As in all epic fantasies, during the climax of the book, Cooper draws these story lines together, but her first efforts at weaving these people into the narrative felt clunky.  Later, she managed the transitions better.

The voice and plot draws you in, allowing me to forgive gaps that needed development.  For example, why did Gair stop hearing the song for a while?  He never asks, but it comes back and that's that?  Also, during his testing, we discover a talent of his that he's know about all along.  Not only does he demonstrate it, but we get nothing from his internal thoughts to let us know he's never shown this to anyone before.  Just another line or two from him would have made this event clear to us and shown us its significance.

Cooper's first novel provides a compelling read.  Once I got beyond the early chapters, I enjoyed it and wanted to keep reading in spite of the gaps in development.  I will read the next book, Trinity Rising, which Cooper describes as much darker than the first.  All in all, I believe she has a good series developing, and I look forward to following her development as a writer.

I give this book 3.5 STARS out of 5 due to development issues, but I still recommend it to anyone who enjoys epic fantasy.
books fantasy fiction

Michael Offutt, Phantom Reader said…
Great review. Thanks for telling me about it.
February 26, 2013 at 2:46 PM