Coke or Pepsi? You Decide 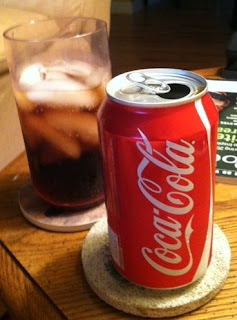 Today, I pose a serious question:  Coke or Pepsi?

I grew up in a Coca-Cola household. Television commercials told me it was the real thing.  I watched a hillside of people sing about giving the world a Coke. So, the idea of drinking Pepsi never crossed my mind until I left home, and the store offered it on sale but not Coke.  I tried the Pepsi, drank it in restaurants when no other choice was available, but I always preferred Coke.

Loyalty aside, consider the flavor.  Coke has a crisp taste and deeper flavor.  I remembered this during our recent vacation to Florida.  Everywhere we went, if I ordered a Coke, they'd say, "We have Pepsi. Is that OK?"  I said yes, like I always do, but after awhile, I wanted to say, "No.  It doesn't taste as good.  I want a Coke."  Of course, my mother raised me better than that, so I accepted the Pepsi, which tasted like a watered-down, higher-carbonated cola. It wasn't the real thing in my book. In our hotel room fridge, I stocked up on Cokes.

And let's face it, all the greats drink Coke:  Santa Claus, the cute polar bears, me.

Maybe this is silly.  Then again, why do waiters double-check with you before they serve a Coke person a Pepsi?  Hmm?


So, which do you prefer?  Coke?  Pepsi?  Something else?  Inquiring minds want to know.
attitude food habits

Tina Parker said…
Coke and only Coke. I drink tea or water when I can't get Coke in restaurants.

Mean Joe Green, I'd like to teach the world to sing, Santa Claus, the Security Cam commercial—would all make me want to drink Coke but it is the taste that makes it spectacular.

Yes, I have tried every Pepsi vs. Coke test. I win every time.

Barbara V. Evers said…
Chris, I anticipated you would mention Coke Zero. I need the fully leaded stuff, myself.

Tina, thanks for the extended list. I drew a blank after Santa and the polar bears, so I figured someone would fill it in for me. PS My older sister drinks Pepsi, too. Yuck.
August 6, 2013 at 8:45 PM

Valerie Keiser Norris said…
I've never done a Coke/Pepsi taste test. John's a loyal Coke fan, so that's what we buy, if we buy. (Neither of us drink much soda.)

I can't handle all the sugar/carbs so occasionally I drink Diet Coke. Terrible stuff, I know, but when I eat popcorn I really want a soda, and diet has to suffice.

Once in a while, though, I allow myself a sip or two of my husband's Coke. Mmm.

Kim said…
I don't drink either one, but hubby likes regular in one but diet in the other! Unfortunately I can never remember which is which. :-) Being from Ohio, Squirt is a favorite - another regional drink for a long time.
August 6, 2013 at 9:32 PM

Barbara V. Evers said…
Kim and Valerie, I went for YEARS without drinking any soft drinks due to some issues with caffeine. I still don't drink more than one a day. And Valerie, I'm with you. If I have popcorn, I need a Coke to go with it.
August 6, 2013 at 9:55 PM

Author JM Kelley said…
I guess I'm in the minority. Total Pepsi addict. I'm trying to mentally prepare to quit or cut down, but I'm still licking my wounds over the trauma of finally quitting smoking. I fear I'm too delicate and far too addicted to caffeine to deal well.
August 6, 2013 at 11:39 PM

JES Hays said…
Coke - and not just any old Coke, either! I have gotten hooked on "Mexican" Cokes, which are made the way Cokes used to be made, with actual cane sugar instead of high-fructose corn crap

Pepsi has never tasted the same to me, either. One of my best friends is a Pepsi drinker, and we both say the same thing about the "opposite" drink: it's too sweet and not carbonated enough.
August 7, 2013 at 9:06 AM

Barbara V. Evers said…
JM, I had to drop from 9 Cokes a day to no caffeine at all at one point in my life. It's best to wean yourself off, then the headaches from withdrawal aren't too bad. I managed to avoid Coke for several years.

I like it. So I eventually started drinking it occasionally. I only allow myself one Coke a day if I do drink it. But that's why I care so much about how it tastes.
August 7, 2013 at 8:05 PM

Barbara V. Evers said…
JES, you scared me there. I thought you were going to say you preferred it in its original formula--which actually contained cocaine. That's why it's called Coke. There's a bit of trivia for everyone.
August 7, 2013 at 8:06 PM

Charlotte Henley Babb said…
I drink coke or R.C. if I want cola...but generally drink ginger ale and put a tablespoon or so of bourbon on top.
August 12, 2013 at 10:22 PM