Southern Heat: An Interview With the Author 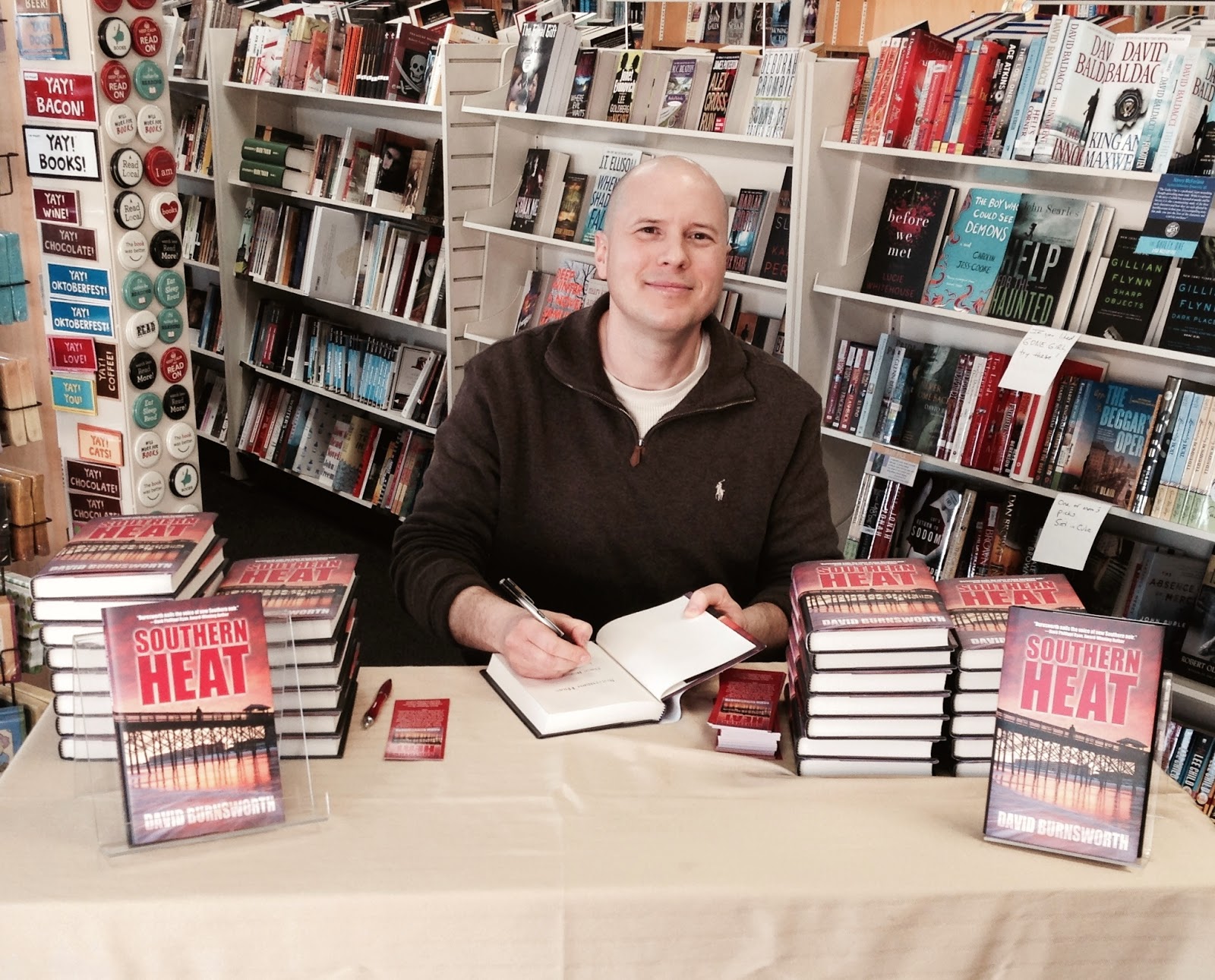 This week, I'm excited to share a recent interview with author, David Burnsworth.  In his debut mystery, Southern Heat, we meet Brack Pelton--widower, ex-military, risk-taker, and a bit damaged.   When his only close relative is killed, Brack dives into a murder mystery that reveals the seedy side of life in Charleston, SC, among the wealthy and on the other side of the tracks.  This book overflows with intriguing characters and situations.  You won't be able to put it down.

NOTE:  David will be giving away a signed copy of his book to one lucky commenter on this post.

You've mentioned that your wife encouraged you to write.  Can you tell us a little about why she did this? What led to her suggestion?
First of all, thanks for letting me be a part of your blog. My wife, Patty, is a very driven person. She really has a passion for what she does, which is in the field of logistics. During our courtship, she realized I wasn’t very happy with where I was and what I was doing and suggested that I needed to find my passion. It hit me one day that I might want to write a book. I mentioned this to her and from that day forward, she prompted me to do it. Six years later, I got a contract for Southern Heat.

Since we are members of the same writing group, I've seen the story of Brack Pelton and Uncle Reggie's murder evolve over time. What are some of the key things you changed as you wrote this story and why?
The protagonist of Southern Heat, Brack Pelton, has changed quite a bit. Initially, I had him named something like John Trent. He began as a Mike Hammer-type P.I. with an office in downtown Charleston, S.C., complete with the prerequisite bombshell secretary. From there, the hero migrated to a married guy trying to make ends meet. Brack Pelton arrived on the scene when I discovered what I wanted in him.

How did the story of Brack come to you? What were your early inspirations?
Brack came to me through a lot of trial and error. I wanted a strong character whose flaws actually helped him. As a Christian, caring for people is important to me. Brack had to have that quality. But he also had to be able, sometimes to a fault, to go after what was right and avenge wrongdoing.

Do you have a scene in Southern Heat that surprised you when you wrote it? What is it and why did it surprise you?
That is a great question! I’d say the scene that surprised me the most is when Brack first enters Mutt’s Bar. It is the one that our fellow SCWW* members who have been following from my beginning will recognize as the time I found my voice. After struggling with third person, I put that scene in first person and Southern Heat began to take shape.

Do you have a favorite scene and/or secondary character?
I have two: Brother Thomas and Shelby. In society, we joke that we have an angel whispering in one ear, and the devil whispering in the other. Brack, through his flaws, already had the devil side covered. He needed an angel guiding him as well. Brother Thomas became that angel. Shelby, Brack’s rescue mix-breed, is Brack’s true companion. He’s based loosely on Patty’s and my dog and I had a lot of fun writing scenes with him. I’ve just finished another draft of the follow-up to Southern Heat and both play roles in it.
I love Brother Thomas' character, too.  I'm not surprised you mentioned him.

What would you say is the best advice you received while writing Southern Heat? Why?
Going beyond my wife’s encouragement to sit down and start typing, I received a lot of good advice while writing Southern Heat. Topping the list, and I believe fellow SCWW member Marsha can be credited for it, was to “keep going.” In the process of figuring out what I was doing and how to become a better writer, my work would get sliced and diced in our critique meetings. I always think about all the feedback I receive and how it can help me write better. Marsha had written the encouragement at the back of the copy of my work she had reviewed. While it might seem simple logic to “keep going,” I felt there was a deeper meaning. To me, it was an introspective moment of deciding how serious I was. When the going got tough, I could have closed my laptop and went looking for another passion. Instead, I dug in my heels and found my voice. The funny thing is, in finishing up the second book in the series and running into some more bumps, I’m reminded of the same advice.

Every writer out there dreams of the day they sign with an agent and the day their book is published. What path did you travel to representation and publication? What advice do you have for other writers?
I was fortunate enough to find an agent and a publisher at about the same time. It took six years from the time I began to write until I’d signed the contract. Between the two events, I received a large stack of rejection letters. There are many avenues for writers to take today. I wanted to be published with a traditional press and be represented by an agent. I’ve been blessed with both. As far as advice to other writers, decide what you want and then be persistent. If your writing isn’t where it needs to be, seek advice of other writers. Attend conferences focused on improving the craft of writing. Talk with people in the business.

What was your proudest or most exciting moment since you signed your publishing contract?
My proudest moments are talking with readers. I enjoy hearing what they have to say, what they liked, and what they didn’t like about Southern Heat.

When will the next book about Brack be published?  What can you tell us about it?
I’ve turned in the latest draft of the follow-up to Southern Heat, currently titled Burning Heat, and my agent is reviewing it. After I fix what she finds wrong, we’ll submit it for publication. I’d like it to come out in 2015, but we don’t have a definite date yet.

What else would you like to share with my readers?
If you read Southern Heat, thanks so much! Feel free to drop me a line and tell me what you thought.

Thank you for your time, David.  I can't wait to read the next book.

If you have an opportunity to meet David in person, do it.  You will find him to be down-to-earth and willing to talk with you.  I've watched his writing migrate to that voice he referred to in this interview. It is unique and carries the reader along the journey with wit and seriousness.

Unknown said…
Congratulations, David! Your book sounds very interesting and one I would love to read. I admire you for sticking with it for so long. I'm sure that makes your success all the sweeter.
May 14, 2014 at 6:51 PM

Unknown said…
Congratulations, David! It sounds like you have come a long way in 6 years. What really makes me want to read this book is how you and Brack "evolved" together. Good luck on your future writings.
May 14, 2014 at 8:00 PM

Bob Strother said…
Southern Heat is a great novel and David Burnsworth a great writer.I'm glad to have been a witness to his well deserved success.
May 14, 2014 at 8:04 PM

Chris Caldwell said…
David, congratulations on your first book. It sounds like a great read. I like that you stated your Christian heritage affected how you developed the main character. Also, since Brack owns a dog, I know I will like him. Blessings as you move forward.
May 14, 2014 at 10:36 PM

You are right that Brack and I evolved together. Of course, we both still have some work to do:)

I hope you enjoy Southern Heat!

It is thanks to the coaching of talented writers such as yourself that Southern Heat was published!

Thanks for taking the time to read it and comment.

Thanks for your comment. I hope you enjoy what Southern Heat turned out to be.

Valerie Norris said…
David, I've gotten to know far more about you through author interviews than I have through SCWW meetings for the past five-six years!

Unknown said…
Thanks, Valerie! SCWW members of the Greenville chapter played a huge part in Southern Heat.
May 15, 2014 at 8:07 PM

Phil Arnold said…
Hey David, your success is a inspiration to the rest of us in the group. Don't get so successful that you stop coming to meetings. I agree with what Valerie said. We should devote a meeting to you where you relate your experiences with submissions, agents, publishers.
May 15, 2014 at 10:08 PM