- July 22, 2014
In just a few days, I'm winging west to spend a few days with my daughter, Heidi Cox, while she and  some very creative friends of hers appear in a panel at San Diego ComicCon (SDCC):

I'm really excited to share this experience with her.  If you're headed to ComicCon check out this panel.

How did you and your team come up with the idea of this panel?
Stephanie and I decided that we definitely wanted to submit a Dweeb Darlings panel idea for SDCC and other cons as well. We felt we had something to say about women and the entertainment industry. We have so many friends who are female and who are producing amazingly original content. It just seemed natural to want to encourage more of it.


What are you trying to achieve during your allotted time?

We want to inspire women to be more creative. We want to inspire people really. We just happen to be a group of women who love to create. At present, I feel there is truly little to no excuse for not making it happen. It is easier than it has ever been.


Who or what are some examples of the female-driven content you are hoping to promote?
Well, Stalking Levar (of course), Fashionably Nerdy, Pike and Trident, Geek Therapy, The Geekie Awards, Elf Quest: A Fan Imagining, Legends of Atoll, the Skyrim Parodies.  This is a partial list, of course, but mostly we want these projects to inspire others to do the same, especially women. I know I am keeping my eyes open for more female directors so if you're out there:  DweebDarlings@gmail.com.


Tell us a little about yourself.
I am a nerdy girl. Being a nerd is cool now, apparently, and thank goodness for that. Some may not realize my nerdy-ness until they get to know me, but I have definitely been less shy about admitting it.  I am from the south, and I have always loved attention which is probably why I think I ended up performing so much. Being creative is an important part of my life, as well. Energy has to go somewhere. It's best that it goes somewhere healthy and expressive. I never viewed myself as a producer and, yet, here I am because of an idea. And doing it makes me happy. 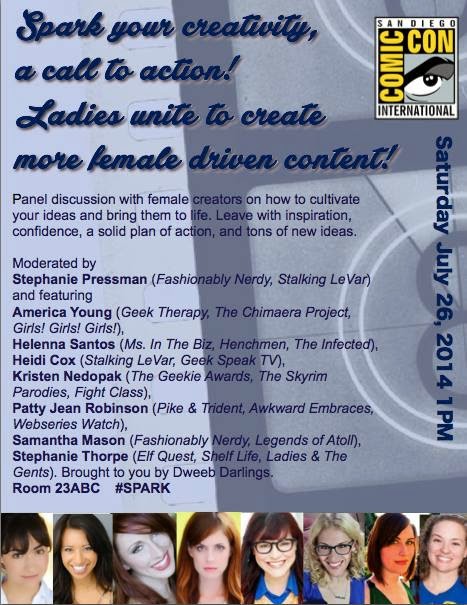 Tell us about the rest of the women on the panel.
All of these women are producers, writers, actresses and some are even directors. They are amazing!
Kristen is a PR genius and created The Geekie Awards, as well as the "Skyrim Parodies". Among America's numerous accomplishments, she has worked closely with Stan Lee on her show "Geek Therapy" and is also known for her work in stunts and motion capture. Samantha is co-creator and host of "Fashionably Nerdy" and producer for "Legends of Atoll". Patty produces and acts in her series "Pike and Trident". Stephanie Thorpe created and produced "Elf Quest" and "The Ladies and the Gents". Helena writes for the blog, Ms. In the Biz, and has produced the film "The Infected". Stephanie (Pressman) who is the moderator and co-creator of the panel is not only one of my best friends but is also the most creatively energetic woman I have ever met. She produces Fashionably Nerdy among several other web series and is one of my producers on "Stalking LeVar" as well as marketing for it and our production company (DweebDarlings). All of these women inspire me to just make it happen...whatever "it" is. They are amazing !


What was the process for applying to conduct a panel at SDCC?
We had to submit an idea to the programming person in hopes that they liked the idea. We were lucky that they did! They sent us an application to fill out that was more detailed. We filled that out and waited.


How long did it take to hear back from SDCC?

It took them a month to get back to us, then we heard that they couldn't fit us in. A few days later, they contacted Stephanie and told her that a spot had opened up for Saturday at 1:00pm which is pretty much the busiest day there.


What else would you like to tell us about this panel? About you?
We really want people to know and feel confident that they can go out and create anything they want. It's so easy now. There is truly no excuse to not do it, no matter what the project is. Even cell phones have cameras and editing apps!
An Eclectic Muse Barbara V. Evers fantasy fiction inspiration SciFi