- May 03, 2016
Do you dream of your novel hitting the big screen? Or maybe even the little screen?

In this day of do-it-yourself creativity, many opportunities exist to get your content delivered to the public.  You just have to be willing to pursue your dream.

This week, rather than talk about the creative pursuit of writing, I want to give you a glimpse of someone who went after their dream, even when the traditional routes weren't working for her. Heidi Cox pursued her dream of acting in Hollywood only to discover how hard it is to get noticed in a sea of beautiful and talented people.

Did she give up? Absolutely not!

She formed her own production company, Dweeb Darlings, and started producing her own content. This past winter, she successfully ran an Indiegogo funding campaign that raised money for the  second season of her web series, Stalking LeVar.

In addition, she, along with other like-minded women, formed the panel, Female Driven Content, a Call to Action. Focused on sharing how women can pursue their dreams when the big studios in Hollywood don't take notice, their panel has appeared at ComicCon and other SciFi/Fantasy conventions for the last few years. I attended their first panel at ComicCon in 2014 and the crowd was standing room only!

Before we go any further, I should disclose that this creative do-it-yourselfer is my daughter, Heidi Cox. I might be a bit biased, but if Wil Wheaton (Star Trek Next Generation) liked and commented on her YouTube channel, then she might have something worth watching. 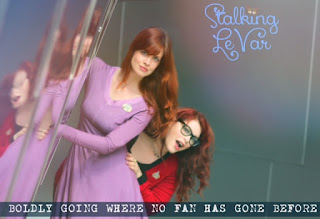 Stalking LeVar follows a woman, Heidi, who is in search of someone. As the story unfolds, we discover she's is convinced she is best friends with LeVar Burton (Roots, Reading Rainbow, Star Trek Next Generation). This comedy series produced four episodes in the first season with a few shorts added in.  In the second season, they have ten episodes planned, with episode four airing this week.

I hope you'll take the time to watch and find inspiration to pursue your own creative dreams.