A Man In a Woman-Dominated Romance World


This week, I offer a guest post from my friend and fellow writer, John Migacz. 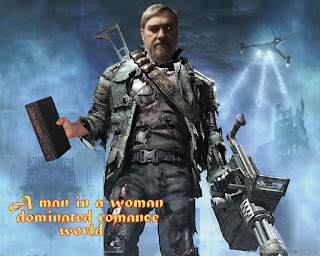 Sitting at a table with a few writer friends, I mentioned that I was searching for a blog topic.  A few suggestions were thrown my way, then someone suggested writing about being a man in a woman-dominated romance world.

I thought, “Yeah!  Great idea!” then, “Wait– what?  I’m a man in a woman-dominated romance world?  How did that happen?”  I should have realized this obvious truth at a national Romance Writers of America conference when they had converted all the nearby men’s rooms into “women only.”

During that hurried ten minute walk to find a non-segregated restroom, it should have occurred to me.  Still, I didn’t see myself as a man in a room full of women—I was in a room full of writers.  Being around writers is always inspiring and inspiration has no sex.  Of course sex can give you inspiration, but that’s a blog for another day.

My MIAWDW (man-in-a-women-dominated-world) journey began at age twelve when I read my first book, a sci/fi novel by Edgar Rice Burroughs.  The hero strove to rescue his kidnapped ladylove from scads of four-armed green monsters, giant yetis, and oily vicious villains.  Like a baby duckling that imprints on a car tire, I followed that piece of rolling rubber through hundreds of sci/fi and fantasy books, and later wrote novels in the same genre.

In the third book of my sci/fi series, The Dieya Chronicles, the protagonist is a young female agent sent out on her first assignment.  I asked David Weber, bestselling author of the Honor Harrington series, how to write a strong female character.  His advice—just write it and don’t worry about her gender.  I struggled with the concept like a ninety-pound weakling against a Mixed Martial Arts champ.  I took his advice, but it didn’t flow—my character was weak, flat, and uninteresting.

One day, I stumbled across a time travel novel.  Cool.  I love those.  The book was written by an author I’d never heard of, and a female to boot.  In the past, I’d found sci/fi books written by women to be either an excuse for male-bashing or just plain incomprehensible.  But I decided to give this new (for me) author, named Nora Roberts, a chance.

Whoa.  In her novel, the hero strove to win his ladylove, just like in that first book I’d read.  This time, he fought against the oily villains of his own prevailing perceptions and that crucial heartbreaker—logic.  Seeing the characters struggle with mind vs. heart was a fight I knew well.  Here was the true conflict found in all good novels.  The backdrop of time travel had little to do with the clash of man vs. woman vs. preconceptions.  Two people thrust into a heady collision of romance where the good guys always win?  What could be better?

I had found a new imprint for that little duckling.

So here I am.  A MIAWDW.  Do I feel like the odd “man” out?  Not really.  Most women I’ve come in contact with at conferences and organizations are writers first, and writing is the dominant theme.  A person’s gender is way down on the list.

The concentrated awareness of character development is why I find romance novels enticing.  Not everyone can identify with a protagonist struggling with alcoholism or agoraphobia, but everyone has had their own love stories in their lives.  If the reader can’t connect and be an integral part of the protagonist’s growth, who really cares if the hero can leap tall buildings in a single bound?

Do I divulge that I’m a man who reads romance novels?  Yep, proudly.

Will I write a pure romance novel?  Doubt it.

Will my novels now contain a heaping helping of romance?