- October 31, 2017
Good stories use conflict and tension to propel a character somewhere they don't want to go. Change equals conflict.

Two of my recent posts, Coming Home: What We Missed and Change and a Novel's Characters, dealt with external changes, but what about the process of internal change? At the end of a story, we need to see our character undergo a personal change based on the circumstances they experience.

To continue the Wizard of Oz example in one of the earlier posts, Dorothy returns home appreciative of the little farm she grew up on. She realizes home is better than "somewhere over the rainbow."

Internal change occurs deep within the character's point of view. The impact on the character can be physical, emotional, or spiritual and will show up in their choices, actions, dialogue, and thoughts.

Before you write about change, it helps to understand how people react to change.


The Stages of Change

Change is a constant. We are always undergoing change of some type. Most changes make tiny ripples. They don't matter. Other changes, the ones that make a story great, create towering waves.

These changes rock the water, shift the floor of the pond, lake, or ocean. They unearth items lost in the depths. It's messy and unpredictable.

Many years ago, Elisabeth Kubler-Ross wrote Death and Dying. In this landmark book, she explored the stages of grief related to terminal illness. It didn't take long for people to realize these same stages apply to change. The stages in order are:

Everyone who experiences a difficult change adjusts to it the same way people adjust to death. Some changes might take longer than others, but the outcome is usually the same-acceptance. 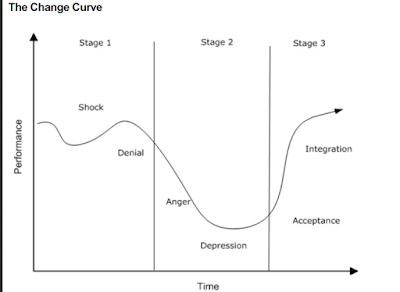 Although most people experience large-scale change through these stages, the rate they pass through the change differs. Some people embrace it without question. Others push back and fight it, even refusing to participate in the change. In any wide-scale change, you will find the following groups: 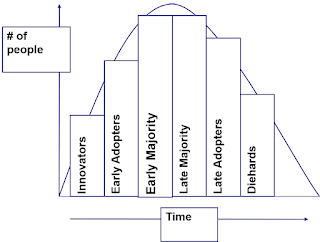 Awareness of these stages and adoption attitudes will help you create a tension-charged atmosphere in your story. What will you do with your protagonist? Many successful stories use innovators to drive the story forward. Will that person be your protagonist or someone else? Other stories succeed by placing the protagonist in a later stage of adoption. Whether your protagonist accepts the change, rejects it, or drives it, he will encounter people at different stages of change. Those interactions lead to great conflict, external and internal.