Do You Measure Up: Judging Your Book Cover & Marketing 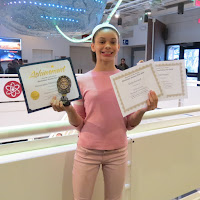 I want to talk about book covers and marketing, but first I want to share a related story.

A few weeks ago, my granddaughter came home with the news that she had won First Place in her school's Science Fair. Elated, I congratulated her and made sure our schedules allowed for the next hurdle: the District Science Fair.

On the day she took her project board and spoke to the judges, I began to worry. Although Victoria is very artsy, she didn't create a flashy project board. She created what her school asked of her. Most of the other kids had flashy boards with all sorts of color. Victoria's board stuck to the science of her experiment with a few targeted visuals.

Later, I wandered through and read the other boards. Only two others besides Victoria went into a scientific explanation of the results of their experiments. The other boards didn't touch on a scientific explanation at all. In the back of my mind, I hoped, but I remembered my father's words to me years ago: Judges are swayed by flashy instead of the true science in a science fair.


They gave awards for the oral presentation and awards for the project. Victoria received an Honorable Mention for her oral report. Each of the Science Fair participants, also, received Gold or Silver commendations. She received Gold in both categories, but she didn't receive an award for her project. The child who won in the project category and received Best In Show had nothing scientific on her board. I remember it well. She didn't explain how she did the experiment, what the results meant, or why she got the results she did.

Her board was very cute and very flashy. She won. Three other children received 2nd-4th place. To be fair the 2nd place winner had the most indepth scientific explanation on her board as well as a flashy board.

I'm not telling this story to complain. I'm VERY proud of Victoria and her accomplishments. She won in my book because she did it right and she did it by herself. I'm sharing this because no matter how much writers prefer words to marketing, the visual part of our strategy remains important. We live in a visual world. If you can't grab people with attractive and meaningful visuals, you can't compete in the book market.

Think about the last book you bought. Why did you buy it?

I would love to know why you bought the last book you bought, physical or digital. Please share in the comments and feel free to share a link to the book's cover, too. I'll start the conversation with my last book.

Barbara V. Evers said…
I just finished reading Hounded by Kevin Hearne. The cover is not bright, but it has an interesting silhouette of a young man in shadow that got my attention. You can check out the cover here:
https://amzn.to/2qBvRdI
April 17, 2018 at 2:56 PM

Arisia said…
The last time I went into a brick-and-mortar bookstore looking for some books to read by authors I had never heard of before because all my favorite authors hadn't written anything recently was somewhere around 2007. I bought several and one of them was a book titled Green by Ted Dekker. It was paperback, the cover was lime green with the title in big black letters. No pictures, no artwork. The reason I bought it was because of the blurb. It sounded interesting. It wasn't the first that I read from the bunch I bought that day, but from the first chapter I knew I had found a new favorite author. He remains my favorite author to this day. Since then I have been busy reading the rest of his books and then books written by writers recommended by him or associated with him or marketed by his brand manager, who is very good by the way. Or recommended by those writers. And on down the line. I don't think I'll ever run out of books to read.
April 17, 2018 at 6:03 PM

Barbara V. Evers said…
Arisia, never running out of something to read is a great problem to have. I'm with you on that one. Now I'll have to go check out Dekker.
April 17, 2018 at 7:30 PM