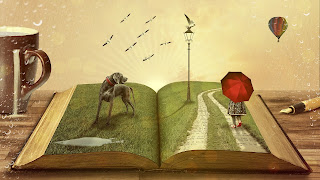 Most writers dream of capturing the imagination of their readers. We write our stories, the characters as real to us as the people we see each day, and hope others will welcome those characters into their hearts and minds.

When J K Rowling wrote the first of the Harry Potter books, did she dream of the overwhelming success and fascination people, young and old, would have with this story? Probably some, but I bet not at the level of popularity it's achieved. Yet, twenty years later, the story of "the boy who lived" continues to resonate with people worldwide.

When you wake up someone's imagination, it can lead to anything. For example, the Harry Potter Science day camp my granddaughter attended this summer. When I signed Victoria up, I wished I could attend. Instead, I did what most adults do when their children get to experience something they never did--I lived vicariously through her. She bubbled over with excitement and news each day, so it wasn't hard to do.

They started the day in the auditorium, waiting to be sorted into houses. With a sorting hat replica and a hidden voice, they sorted each child into a house, placing their own spin on some of the classic dialogues from the movies. Here's one Victoria told me about:

My granddaughter became a member of Ravenclaw House, the one that values intelligence, creativity, and wit. A perfect match for her interests!

The Ravenclaws attended The Care Of Magical Creatures class on the first day. Nope, Hagrid didn't teach it, but they did dissect owl pellets looking for rat bones. She brought them home in a large petri dish.

She explored stars and planets in Astronomy class. They spent time in the planetarium and worked on star maps and a star scroll. She, also, made her wand that day.

Her house attended the Hogwarts version of botany--Herbology. They experimented with various herbs and essential oils, and she came home with a homemade teabag of peppermint and chamomile (I joked that it would wake her up while putting her to sleep), and homemade vanilla and lavendar soap. Of course, what class isn't complete without notes? They provided hand bound notebooks and gave the students an actual quill and inkwell to write their notes. How cool is that?

Off to potions she went minus the presence of the dreaded Professor Snape. She brought home green slime and a bottle filled with "lake water" from the giant squid's habitat. I'm not sure what's in the "lake water," but it's green with thick black sludgy looking stuff in the bottom.

Each day, one of the houses made a broom. Ravenclaw, due to some problem (a troll in the bathrooms maybe?) finally made theirs on the last day.  You can't finish your Hogwarts experience without taking the O.W.L.s (Ordinary Wizard Levels) examination. The tournament between the four houses tested their knowledge of Harry Potter and of the science topics they'd studied during the week. At least, they invited parents to see this part. I was amazed at the knowledge the kids gained, not only of the books but the sciences as well. Each child came home with the results of their O.W.L.s on this last day. Victoria received all O's which represents Outstanding work.

You can't have a Harry Potter Science Camp without a Quidditch match or two. No, they didn't fly, but they did have a golden snitch, quafflers, and bludgers. Victoria was a beater. Her team won some games, but didn't take home the overall Quidditch championship.

Where were these camps when I was a kid?

Stories That Grab the Readers

The mark of true success as an author, I believe can not be figured with sales volume, although it's a nice marker. I think a truer measure is the imagination the story ignites in the reader. When you have seven books (in the Harry Potter series), eight movies, theme parks, spin-off books, spin-off movies, and experiences like this camp, I'd say you've succeeded beyond what most of us imagine.

Still, I'd settle for an agent and publisher for now...but I can dream, can't I?

Crystal Collier said…
Dreams lead to action, action leads to reality. Dream away!
September 5, 2018 at 10:41 AM

Barbara V. Evers said…
Crystal, exactly my way of thinking! Thanks! Plus, without dreams, life would be hopeless, wouldn't it?
September 5, 2018 at 12:38 PM


As an old guy who is partially disabled and suffering some degree of pain nearly always while abiding somewhere between curmudgeonhood and the front stoop of senility, I often find it difficult to break away from a jaundiced attitude. I must, however, tell you I found this Harry Potter Science day camp both delightful and educational in both concept and practice. From Day 1 and the Sorting Hat through each subsequent day’s subjects, those young people must’ve had loads of fun while learning some things. I suspect there were a good many of those imaginations to which you referred awakened also. Mix that up with the games, and I would guess your granddaughter had a great time while accumulating all those “O’s”. You began by saying something with regard to dreaming about awakening reader’s imaginations. I thought about that. Sometimes, it might be the other way around. Our dreams may arise out of our imagination, Anyhow, there’s that old saw: “If you can dream it, you can do it.” Maybe that might apply to finding an agent and a publisher. Perhaps, even Headmaster Albus Dumbledore, D. Wiz., X.J.(sore), S. of Mag.Q. might agree.

Barbara V. Evers said…
Skip, I'm glad this post provided delight for your day. I don't doubt this camp tapped into the muses of these children. I know it took a lot of imagination to put it together, and it relies on the children's willing imaginations to pull it off. Thank goodness, kids are more willing to imagine.

And yes, I agree with the dream it, do it adage. I've been dreaming of publication for some time now. I've had a few things published but not the big one. I like the idea of Dumbledore endorsing that idea, though. Another form of encouragement to keep me plugging away.
September 6, 2018 at 9:44 AM