Stories About the US National Anthem 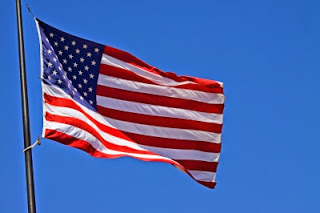 Most national events remind me of a story my fifth grade teacher told us about the national anthem.  While she was in high school, the teens of America voted on which song would become our national anthem, "The Star Spangled Banner" or "America The Beautiful."  I remember thinking how stupid they were to choose "The Star Spangled Banner."  My young mind appreciated the melodic strains of "America the Beautiful" so much more.

Try as I might, I've found nothing on the internet about this election.  The details of how this song became our national anthem are slight.  After I ran the post in 2012, I received comments from four different people who had heard the story from an older relative. It turns out all of the school children voted on the song, and "My Country Tis" of Thee was, also, on the ballot.

What did I find on the internet about our national anthem?

It was commonly used by the Navy in 1889, and President Woodrow Wilson recognized it as our national anthem in 1916. It wasn't until 1931 that a congressional resolution officially established it as the US national anthem.  Before 1931, several patriotic songs served the purpose of an anthem when needed.

"Ripley's Believe It or Not!" ran a cartoon in 1929 stating that the US didn't have a national anthem.  This created a flood of letters to congress asking that they establish one.  Could the school children vote stem from this?

Nevertheless, Key's account of being detained on a British ship while they attacked Baltimore, his frustration, prayers, and concerns for his fellow countryman, and the glory of a sunrise revealing our flag still flying became the national anthem.

Over the years, I've come to love this song and often choke up over the sentiment.  Are there odd lyrics in the other stanzas?  Yes, if you don't know their history.  One in particular refers to the slaves that did not win.  It turns out that the British enlisted many freed slaves in their army, and those slaves asked to be on the front lines of this attack.  From Key's perspective, it rang of treason, so he gloried in their failure.

Over the years, the other stanzas have been left off due to their questionable nature.  We know the first verse, although some people still don't get it right.

Another person who commented on the 2012 post shared this:


... a singer [stated that] the beauty of "The Star Spangled Banner" is that it takes a “nation to sing it.” It wasn’t intended to be sung by a single person... growing up on base we heard The Star Spangled Banner frequently. It was played before every movie shown in the base theater — and we all had to stand with our hands over our hearts as it played. I almost think we should return to a few of the ceremonies from my youth. Playing The Star Spangled Banner before all movies, when TV stations shutdown at night...

I don't think any station signs off the air anymore, but believe it or not, they used to and played the anthem when they did.

If anyone reading this recalls any other details of this vote, please add them to the comments below this post.

Meanwhile, thank you for the efforts of so many people who stand up for our rights and freedoms by serving in our country's military.
backstory holidays inspiration leadership military