A Conversation With Author, Bob Strother 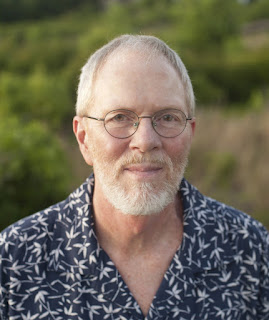 I personally know many of the featured authors, as is the case with today's guest, Bob Strother.  I met Bob in 2007 when I first attended a local chapter of what was then called South Carolina Writers' Workshop (now known as South Carolina Writers' Association or SCWA). He is a gifted writer with many publishing credentials beyond the novels mentioned below.

A two-time Pushcart Prize nominee, award-winning author Bob Strother has been published internationally and his work adapted for film. In addition to Burning Time, A Fire to be Kindled, and Embers on the Wind, his previous publications include the short story collection Scattered, Smothered, and Covered and the novel Shug’s Place. He is also a contributor to Southern Writers Magazine.

I’m currently working on a sequel to the novel Shug’s Place published through Main Street Rag Publishing Company in 2013. It’s been a while since I wrote about the working-class bar in downtown Detroit, but in the interim, I completed the Burning Time trilogy, including Burning Time, A Fire to be Kindled, and Embers on the Wind.

Several of my readers have told me Shug’s Place was their favorite of my works, so naturally the thought of doing a sequel seemed a logical move. The work in progress, Stories Not to be Told, is also told in a series of rather long stories, involving several of the original characters, plus a few new ones I hope will spark reader interest. Unlike Shug’s Place, which took place almost exclusively in Detroit, the current work will have readers hopscotching all around the country.

How does your book differ from others in the genre?
You don’t find many novels that are told in stories. I didn’t know exactly what to call Shug’s Place when I first wrote it. Was it a short story collection? Sort of, but also very different from my 2011 collection Scattered, Smothered, and Covered. Similarly, it wasn’t like any novel I’d previously come across. It was at the South Carolina Writers Workshop annual conference in 2014 when an agent who reviewed my manuscript told me it was a novel-in-stories. They’re still few and far between, I think, but at least I know what to call it now.

I also believe it’s different in that I wouldn’t term it a thriller, a mystery, or an action-drama, though both books have elements of all three. I would describe the two works, instead, as character-based crime stories.

I started with short stories because when I first began writing I had all these ideas swirling around in my head. So many, I worried I’d forget some if I didn’t get them down in at least a rough form as soon as possible.

I’ve always been drawn to crime drama and the darker side of the human condition, and most of my stories went in that direction. In fact, Shug’s Place began as a stand-alone short story, By Any Other Name. Then one of my SCWW chapter colleagues—one with whom I’d been trading critiques—said, “You outta write more stories and make this into a novel.” So, I did. Thank you, John Migacz, for the suggestion.

The Burning Time trilogy was inspired by my real-life grandparents, whom I adored and admired, persons in many ways ahead of their time. The trilogy is my way of immortalizing their spirits and the good they left behind. Not to mention more than ample fodder for three novels.

It depends on what I’m writing. If it’s short stories, I’ll spend a few hours or a few days from start to completion. No set time or schedule. Just get it done and reward myself with a few days off—or until the next story idea hits.

When I’m working on a novel, I try to write a little every day or almost every day. Doesn’t have to be a set number of words.  Five hundred words is great, but it might be as little as a paragraph. The idea is to keep at it. I also go back every new day and re-read what I wrote the day before. I’ll hone it if necessary, and it gets me back in the zone so I can move forward without losing momentum. 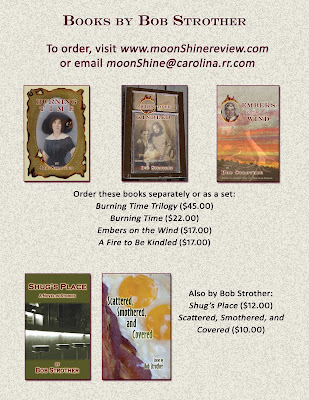 To purchase Bob's other books, email to moonshine@carolina.rr.com.


Authors, do you want to participate in this series?

Steve Gordy said…
I’m trying to put together a novel-in-stories. Shug’s Place is an inspiration (also an aspiration).
September 10, 2019 at 12:43 PM