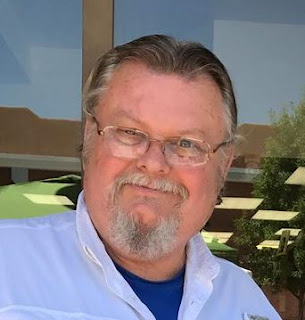 For the next few months, I plan to feature various authors and writers in interview-styled posts. Writers will find some jewels of helpful information within these interviews, and readers, I hope, will find their next "To Be Read" book.

Although I have met many of the authors in this series, Robert and I have never officially met. We are both part of the South Carolina Writers' Association, so we've had email and Facebook conversations. I hope someday to meet him face to face.

Robert F. Lackey lived in Havre de Grace, MD for twenty-three years, spending many afternoons exploring the remnants of the Susquehanna and Tidewater Canal. The area is rich in history and watershed culture reaching back to the beginning of the country. Among the many historic themes coexisting within the nearby sites and lanes, the Canal Era drew the author’s attention first. Stepping outside technical writing to publish his first historical novel, Pulaski’s Canal,  in 2014, Robert began a family story that has blossomed into a Maryland family saga covering 1839 to 1872. Despot’s Heel (1860-1862), to be released in November 2019, now joins the saga as the 7th volume of the planned 10-book series.

Robert is a member of the Historical Society of Harford County, Historical Novel Society, the Surfside Writer’s Group, and a past president of the South Carolina Writer’s Association. He currently lives in Murrells Inlet, SC with his patient wife, Sandi, who supports his love of Havre de Grace and his frequent returns to the little town he calls “that exquisite gem at the head of the Chesapeake Bay.”

I am writing a series of historical novels set in Havre de Grace, Maryland, in the mid-1800s. The main characters Ben and Sonja Pulaski, their sons Isaac and Aaron, and long-lost daughter Alisha, represent an amalgam of anecdotal experiences of 19th century Maryland. The Pulaski Saga's 7th volume releases in November of this year in the planned 10-volume series. I am already planning a prequel for the Pulaski’s and Havre de Grace for the years 1825-1839, and now considering a 1920s novel in the same locale. Maryland is a gold mine of historical conundrums.

I approach the historical events as they would affect the family members, giving the reader multiple perspectives:

The series chronicles life, technology and personal struggles from canal barges to sailing the Chesapeake Bay. It covers significant historical eras, all through the eyes and emotions of the family members. These character profiles are immersed in past events but steered by their own sets of morals and ethics, including interactions with their own loves and children as the decades continue.

The overarching story arc is the Pulaski journey from accepting slavery as a slave state to more significant commitments of action against slavery and then beyond the post-war years. Additionally, each novel in the series provides the reader with not commonly known historical facts germane to the character’s roles. In the three books that occur before and during the Civil War, the reader sees the personal impact on Ben and Sonja as parents and partners, a soldier’s view from Isaac, Alisha as a participant in the Underground Railroad in Pennsylvania, and Aaron, the reporter, interviewing national figures.

I am a history junkie with a vivid imagination. My earliest whoppers were at four years of age when I told my Pensacola neighbors that I rode through the night on a white horse, stabbing alligators with my sword. I have written more whoppers since I was twelve, but at least then admitting they were fiction. My first peek into a men’s magazine at age thirteen, introduced me to C.S. Forester’s Horatio Hornblower among the pages of Argosy. I remain a functioning junkie.

I must write every day. It may not be on a manuscript, but it is the only way to quiet the frenzy in my mind. I think writer’s block is a myth. Before the Pulaskis, I wrote redneck short stories, a fantasy adventure, and a children’s adventure story under the pen name “Pug Greenwood.”

My current pace is to create two historical novels a year. I identify the period, the major events, and correlating events, and then develop arcs for each of the main characters. From there, I identify other roles to support each sub-arc story and then include either a character I have used before or create new ones. With the new recipe, I then write 500 to 2,000 words a day, usually completing 90,000 words in 3.5 to 4 months. There are times that I awaken at 1 or 2 in the morning and cannot get back to sleep. I have learned to grab that energy and go to my writing room (the Word Factory) and write until I become tired AND I have an idea of what will/must happen next.

My books are available through my website or in specific stores listed in the image below. 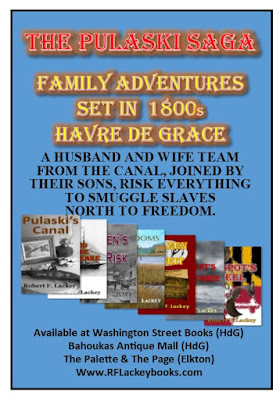