A Conversation with Poet, Allen Guest 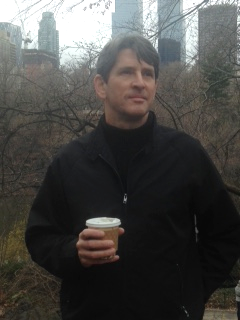 For the rest of 2019, I plan to feature various authors and writers in interview-styled posts. Writers will find some jewels of helpful information within these interviews, and readers, I hope, will find their next "To Be Read" book.

This next interview is with a poet who joined our writing group about four years ago. His poetry captured our imagination in ways we didn't expect. Not everyone in our group understands the nuances of poetry, but Allen's ability to take something so personal and make it vivid made us better at appreciating poetry.

Allen Guest is a Senior Lecturer in the School of Mathematical Sciences at Clemson University, where he mostly teaches courses in the calculus sequence for science and engineering majors. He lives in Clemson with his wife Suzette and their cats, Daisy and Dolly.

Allen's parents were accountants, so it’s not surprising that he ended up working in mathematics. They also filled their house with books and magazines and always encouraged reading. His mother hauled Allen and his brother to the local library countless times when they were too young to drive. Allen supposes he enjoys words about as much as he does numbers.

Allen has been writing seriously for about four years, almost all poetry. His poems have appeared in Tilde, Flying South, The Petigru Review, The Esthetic Apostle, Cathexis Northwest Press (online), From the Depths (upcoming), and SPLASH! (upcoming, online).  Three of his poems have been nominated for the 2020 Pushcart Prize.

These days I am working on whatever puts an image in my head.  Sometimes it’s a new experience, sometimes it’s a memory from many years ago. My two upcoming publications are both poems that were, for the most part, based on memories from my (much) younger years.  I try to use language to capture the essence of the experience in much the same way that a mathematical model can distill a complex system down to its key features.

How does my book differ from others in its genre?

I have two unpublished manuscripts.  One is simply a collection of somewhat unrelated poems.  The second, and perhaps more unique one, is a series of poems I wrote in the voice of my great-uncle Elmer Guest, the older brother of my paternal grandfather.  He was sentenced to the Georgia chain gang in 1928 for murdering his first wife.  He escaped three times, getting away for good in 1934.  By 1936 he had assumed an alias, remarried, and fathered a daughter by his second wife. They did not learn his true identity until after he died.  Writing in the voice of another person was a liberating experience for me. I had to use simple language (he was not a highly educated man) to tell the various stories that I learned about him, most of them told to me by my father.

I think I write what I do because there is something about the pattern of the words that I find interesting – the rhythm of the line, or more often, the mix of rhythm and mental image created by the words.  I also find the writing process to be relaxing in the way of any mindful activity.  When I am really into my writing, time seems suspended, much the way it is when I am engrossed in a math problem.  If I end up with a poem I like, all the better, but the activity of writing is reward enough.

It varies, but there seems to be two common patterns.  One of them is just stumbling onto a phrase that I like, and then trying to build a poem around it – almost like working from the middle outward. One of my upcoming publications is like that.  I had carried around a phrase for months (“as doomed as dime-store goldfish”), then one day I had an idea for a poem in which the phrase was appropriate.  The line showed up about midway through the poem.

The second pattern is simple image recreation. I see something that strikes me and etches itself in my visual memory.  Later I try to recreate that image with words, and if I am lucky, I stumble onto some good words or lines that capture what’s in my head.

Where can we find your works?

My works can be found in several literary journals.  Below are some links to these publications:

Phil Arnold said…
Great interview. Allen is so interesting. When he starts writing short stories, they will be wonderful like his poems.
November 13, 2019 at 4:17 PM