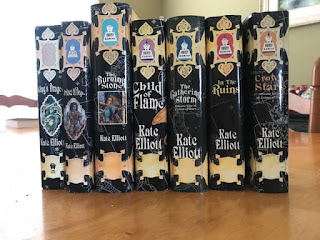 At some point in the writing process, most writers seek feedback on their work either from a writing critique group or beta readers, or both. They want to know if the story flows well and entices people to keep reading.
If you've written a book and aren't using either of these feedback options, you might want to rethink your approach before submitting to agents or publishers.
Both sources can be valuable during your revision process, but you want to consider the contributions and backgrounds of the people involved. Which brings me to the impetus for my post today: I asked too much of my critique group last month.

Why? Half of the writers in the group know the story in my upcoming trilogy (releasing in Dec. 2020). They've seen large parts of books one and two. The other half have never seen this work. The Watchers is an epic fantasy trilogy. I'm working on book three and decided to run the opening chapters past the group to see how well it worked. I, also, wanted to know how much they understood, in the case of those who never saw the first two books.

Some members of the group followed my first chapters without a problem, not concerned about the gaps in their memory or knowledge. A few remembered details that surprised me. Others struggled. For the most part, the latter group fell into the ones who never saw the story before; although, I'm glad to say several of them did grasp enough to want to read the first two books.

Our writing group represents all genres. Few of them read or write epic fantasy. At this point in the revision process, I need epic readers with familiarity to the first two books.

Coming into an epic fantasy trilogy on book three can be a bit of a problem. I knew this going in.

(Posts I've written about finding and working with critique groups.)

Most epic readers refuse to start in the middle. They find book one and start there. If they do decide to stick with a later book in the series, having not read book one, they expect and accept a certain amount of confusion. They realize the story arc continues throughout the series; you must start at the beginning to grasp the full arc. Some readers even re-read the previous books prior to reading the most recent release. Since epic series can run from three to fifteen books, that's quite a commitment to the story and author.

Let's face it, it's called epic for a reason. Even Merriam Webster struggles to define the term:

As a noun:
And as an adjective:

My second grade teacher instructed us not to use the word you're defining within its definition. Websters appears to not know this rule or can't figure out a way around it. Some words, I guess, are harder to define than others. As far as epic fantasy goes, the second adjective definition comes the closest to explaining epic when related to fiction.

What about the definition of epic fantasy? You'll find a plethora of thoughts and ideas on what it is or isn't. I've provided a few links below where people attempt to explain the genre. While each of these entries have similarities, they don't fully agree on the definition, either.

The genre and its readers know what to expect and love reading the extensive world-building that spans several cultures. They expect a huge cast of characters from those cultures. Someone or something out of the ordinary rocks the world--usually someone seeking to conquer everyone else. There are battles and intrigue. Cultures clash. Characters scatter across the kingdoms creating the need for multiple points of views. The end of book one is not the end of the story. There's a shorter arc that might be fulfilled, but the main story conflict continues in later books.

Epic fantasy readers know these things and expect long books. They joke about the ability to use the books as doorstops. In many cases, the epic story can take many books to complete the overall story arc. (George R. R. Martin anyone?)

Which brings me back to my writing group. We're a diverse genre group. The concept of book series is different in other genres, for example James Bond. Each story in the 007 series stands alone. Yes, the stories contribute to the development of the character, and readers learn about him as the series progresses, but you can pick up a book in the series and read it without having read the previous books.
Epic fantasy doesn't do that. It expects you to know what happened in previous books. Epic fantasy is a different animal (in many cases literally*).

Which led me to a realization: I can't ask my writing group to critique the third book in this trilogy. Other members who write series often don't bring in the sequels for feedback. This bothered me, before, but now I understand. You find yourself explaining something inherent to the series instead of getting feedback on the writing sample offered in that meeting--which is what a critique groups does.
Beta readers make more sense at this point in my process. I have several who beta read books one and two, so I'll be reaching out to them soon. (If you're one of them, feel free to reach first.) They know the world and genre, so they can provide on-point feedback. That's what I need. And they serve several purposes:
Do you have beta readers for your books? I don't mean your mom or your best friend. Beta readers take your entire work and read it to give you useful feedback. They don't have to be publishing professionals, but they do need to read and love the genre of your story.
If you don't use beta readers, you might want to consider them. Keep in mind, you should tell them what kinds of feedback you want, especially if you've never worked with a beta reader. For example, you don't need the manuscript proofread for typos yet. You will be revising the story after they read it if they've done they're job well. Leave the proofreading for the final revision.
Depending on your needs, beta readers and critique groups can save you trouble and heartache during the revision process. They can hone in on what works and what's confusing. They both serve a different purpose, and I support both avenues.
What has been your experience with beta readers and critique groups?
* A pathetic joke for fantasy readers
An Eclectic Muse beta readers critique groups epic fantasy The Watchers of Moniah

Alexa Day said…
Our group is amazing! I might be the only erotica writer, but I think I'm getting stronger feedback as a result, and reading outside my genre is making me a better writer. I'm looking forward to running the current story past beta readers once I clear this round of edits to see how it works for people who are accustomed to erotica. I have a sense for how I want it to land within the range of genre expectations, and that way, I'll be sure.

Barbara V. Evers said…
Alexa, I agree. The group has been an incredible asset for me. I've learned a lot from them and seen others gain a lot, too.
September 1, 2020 at 11:38 AM

I agree with Alexa. I get a lot of benefit from our critique group, both in their critiques of my pages and in my attempts to critique their pages. I've learned a lot, but mostly I've learned how little I know. When I started, I had no clue readers had expectations for each genre, nor that it's important to meet those expectations. But in order to do that, I have to know what genre I'm writing.

Maybe the problem is that I didn't start out to write any particular genre. There's this story in my head, and I'm trying to get it out. As far as I can tell, it's a mix of several genres. Maybe this is my practice story that no one will ever want to publish because it's such a hodgepodge. I can practice meeting the expectations of all the genres mixed up in it. Ha!
September 1, 2020 at 5:47 PM

Barbara V. Evers said…
Arisia, your story is really good. I can tell you’ve learned a lot since you started bringing your work in. But don’t slight yourself. You had a lot going for you, too.

I agree. Our group is amazing, My point is that there’s a time for critique groups and a time for beta readers. I can’t get the feedback I need now because of the extensive world building from the first two books. If this group was fully familiar with the first two books, I’d probably continue to bring it in. Since they’re not, i’m shifting to betas.
September 1, 2020 at 7:44 PM