Stories With Barbara: The Watchers in Exile

In case you missed the announcement yesterday, THE WATCHERS IN EXILE, the second book in my epic fantasy trilogy, is now available.

If you were anywhere near Greer, SC last night, you might have heard me squeal in excitement. Why? This book hit #1 in New Releases on Amazon yesterday!. I didn't expect that, and I'm still trying to grasp this truth. Thank you for purchasing and spreading the word about The Watchers of Moniah series! 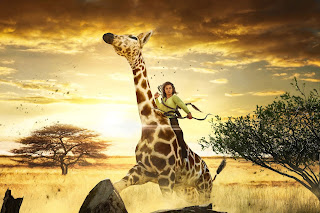 During the last week of the month I record a YouTube video of one of my stories. In honor of this week's book release, I decided to share part of Chapter One from THE WATCHERS IN EXILE with you today. Below the video, you'll find the back cover description and links to purchase both books.

Note: the video was filmed on launch day and shared privately with newsletter subscribers first. If you want to receive advance notice of events and prizes, consider signing up for The Watcher Tribe newsletter.

Who do you trust, when everything falls apart?

Attacked as she travels home to Moniah for her coronation, Princess Adana struggles to hold onto her kingdom. Driven from her heavily guarded caravan by soldiers she previously thought loyal, Adana follows the lead of the royal giraffes and flees to a small village in the Monian hinterland. Separated in the attack, her betrothed, Prince Kiffen of Elwar, is forced in the opposite direction, and he leads the survivors of the battle to the Border Keep between the two kingdoms.

Although isolated from each other, Adana and Kiffen can communicate through their telepathically-bonded royal giraffes, and together they seek to build an army to stop the traitor Maligon. Doing so may not be possible, though, as he has already overthrown the kingdoms of Belwyn and Teletia, and is using the couple’s betrothal to turn the people of both Moniah and Elwar against them as his army races across the savanna to capture the Seat of Authority in Moniah.

Maligon excels at turning loyal subjects into traitors, and Adana and Kiffen must find a way to trust not only each other, but those around them, while protecting themselves from within. Turncoats abound, and if Adana and Kiffen fail to recognize the ones in their midst, all hope will be lost for the Four Kingdoms.
________________________________
Both books are available on Amazon in e-book or paperback format. They are, also, part of the Kindle Unlimited program.
You can find them on Amazon here, and my local independent book store, Fiction Addiction:
Barbara V. Evers Book Release epic fantasy giraffe The Watchers in Exile The Watchers of Moniah