Home From CONJuration: What a Blast! 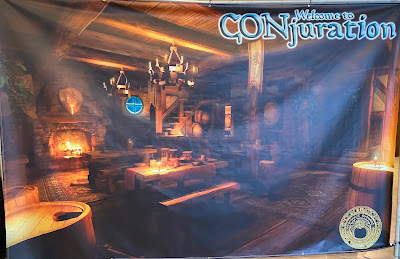 I had such a blast at CONJuration this weekend! Never heard of it? Well, read on. You won't want to miss it next year!

With a Harry Potter theme aimed at the whole family, how can you go wrong? Answer: You can't!

I've read these books many times (although I met my knowledge match in
several of the attendees), so it was so much fun seeing how people interpreted the stories into costumes and panels.

On Sunday, I participated on a “Harry Potter - What If?” panel where we explored questions such as:

The discussion was lively between the audience and the panel. Such a blast.
I, also, sat on "What Would It Be Like to be a Wizarding Mom?" where we explored the pitfalls, joys, and gaps in knowledge about raising wizarding children. My friend, author Lydia Sherrer, suggested this panel, and I knew I had to be on it.
Did it ever occur to you that we know nothing about how wizarding children are taught prior to attending Hogwarts? We made some educated guesses and considered the challenges of raising children who manifest their powers during a time in their life where following the rules is not typically their preference. Tons of interesting thoughts and discussions from audience and panel here, too.

Speaking of panels, I sat on several and wished I could participate in more. I brought my “Animals as Characters” one to the con this year. No two cons where I've led this have had the same discussion which is thrilling for me. Lydia Sherrer and Cecilia Dominic joined me as we explored the biology of the animals and how they operate as characters, whether through their point of view or through another character's.  And we had an extensive discussion about purring.
If you enjoy improv, then two of the panels I sat on would probably interest you. In “Dragons, Wizards, and Pens,” we were given a word and had a few moments to write the best opening sentence using that word. The audience voted for their favorite each round, and I came in a close second to the winner. The winner, Sarah Brubaker, hit her stride early, and it was hard to beat her quick wit. We even took shots at her in our sentence creation. Vincent E. M.Thorne won one round by crafting a sentence where I created a violin out of Sarah's ribcage. I wish I could recall the exact phrasing. It was hilarious. Rounding out our panel was the hilarious E. Robert Dunn.
Kudos to Sarah for sitting on a panel with three published writers and beating us at our own game. FYI, Sarah does have novels she's trying to get published, so keep an eye out for her work. I guarantee it has to be amazing.
In case your curious, my best sentence came from using the word carburetor: "Man oh man," the female AI elbowed her maker, "check out the carburetor on that Transformer!"
The other improv panel, “To Tell the Truth,” required panelists tell a story from a prompt on a slip of paper drawn from an envelope. For example, one of mine was: Tell a story about when you were in a boat that sank. We told the story, and the audience guessed if it was true or false. If you fooled the audience, you got a point. I came in second on this one, too. The winner? The same person who won the Dragons, Wizards, and Pens competition, Sarah! She was dressed as the Light Fury Dragon (see above) that day, and her game play had lots of energy!
My one regret, and it's not much of one considering the plethora of opportunities available, was not being able to participate in any of the Sorting panels. I had my eye on “Sorting Buffy and Angel,” but it conflicted with a panel I'd already committed to doing. In sorting panels, you take well-known people or characters and discuss where the sorting hat might put them. This year they sorted Buffy and Angel, heavy metal bands, Disney princesses, and well-known criminals. There may have been more, but those are the ones I recall.
Even though I couldn't fit a sorting panel into my schedule, I did participate in several writing-related ones:
On three of these panels, I shared the table with two authors I'm glad to have met:  John Adcox and Dennis Medbury. The three of us made a great team. By the end of the weekend, John was reminding me if I left something out of my intro, and I corrected him when he gave the wrong date for his book launch for A Christmas Past: A Ghostly Winter Tale (available Nov 30).

While I was on panels or peddling my wares in the Dealer Room, my kids enjoyed all sorts of fun entertainment. I'm actually a bit jealous I didn't get to tag along with them for these. My grandson played Quidditch and several rounds of virtual reality . He and the balloon man had to have been on first-name basis by the end of the weekend. I've never seen so many balloon creations in my life, and my grandson only popped one. Impressive for a ten year old! They, also, had bounce houses, fire twirlers, performances going on all the time, and when you got thirsty, you could get a mug of butter beer.
My granddaughter loved checking out the cosplayers, performances, and the Georgia Reptile Society. I think they adopted her! She spent almost all of the last day in the reptile room "assisting" the reptile caretakers. She came home talking about each animal by name. I asked her what the names of the people were in the reptile room, and she couldn't recall. That girl! Put her together with animals, and she's always happy.

CONJuration is the brainchild of Chris and Angela Seckinger. They wanted an environment where  kids and adults could experience the world of Harry Potter and other beloved fantasy literature. They succeeded, too. The result is full of fun experiences and joy. Everyone, from the planners to the attendees, kept the atmosphere upbeat. Worried you won't know anyone when you go? Doesn't matter. People are so friendly! When I wasn't on panels, I had a table in Diagon Alley (AKA the Dealer Room), and so many people came by and talked with me about The Watchers of Moniah series, and giraffes, and writing, and just plain fun! I don't know how they managed to create an atmosphere of so much fun and camaraderie, but they did!
Were you there? Jump to the comments and tell me your favorite moments.
CONJuration epic fantasy fantasy Fantasy Novels Harry Potter

Anonymous said…
I saw a number of the panels you were on and was glad for you being there. The giraffe based magical world sounds unique, and I had no idea how dire their situation is becoming! While limited to two occasions, they have always seemed to be such sweet animals, even if their tongues are a bit imposing.
Hope to see you back next year!
November 10, 2021 at 10:43 AM

Barbara V. Evers said…
Thank you for your kind words! I hope to be back next year, too. Please make sure you give a positive rating to those panels, so they know what to plan for next year.