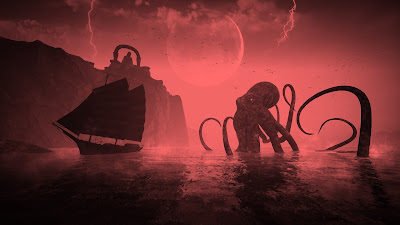 What in the world does the kraken have to do with a writer's ego? I promise to explain, so stick with me.

A writer must let loose their ego to get words on the page. The idea they have something to say relies on that ego. There's no shame in that. All artists possess a certain level of ego or they would never pursue their creative interests.

True writers have no choice in the matter. Something compels them to write. The kraken...oops... the ego must rise to the surface and play. Ask any writer dedicated to their craft, and they'll tell you the compulsion to write can't be ignored.

So why do so many aspiring writers stop writing?

To answer why a writer gives up, you first need to explore the writer's goals. For some the drive to write satisfies their compulsion. Writing it down is their goal.

Others seek publication, to see their work bound or digitized into a book.

Then there are the ones who seek fame and grandeur. They believe authors make a lot of money.

Excuse me while I laugh. Really hard.

Sorry. I couldn't help myself. Publication, whether through traditional paths or self-publishing, doesn't guarantee fame. Most authors can't afford to quit their day jobs.

If this piece of news bursts your bubble, I won't apologize. Don't pursue writing with the idea you're going to become a best seller. There's no magic formula to make that happen, although there are people who claim they know that formula. Those people prey on the writer's ego to help them take your money to their bank.

The compulsion to write helps a writer finish a story, poem, or novel. Thanks to self-publishing options, the desire to become published is not far-fetched, either. As long as you write the book. (Psst! Editing the book helps a LOT, too. Please do that!)

Most people who quit either don't have or have lost the compulsion to write.

For others, the realization that authors don't make the big bucks stifles their desire.

And some people's writing screeches to a halt when they realize it takes time. Lots of time.

I believe the majority of writers quit because they don't know how to reign in their egos. They let the kraken take over.

Yes, you must release the ego to get words on the page or screen, but once you seek feedback on your work, that ego-kraken needs to sink to the depths of the ocean and remain quiet. Many aspiring writers can't do this. They lack the thick skin required to learn what works and what doesn't.

None of us, start writing with the current-day expertise of Neil Gaiman or Nora Roberts. Their level of accomplishment takes time. It takes work. It takes openness to learn what works and what doesn't.

Instead, many writers want to skip those steps and arrive.

Some years ago, a writer showed up at our local writing group's meeting. When we did introductions, he compared his writing to John Grisham's. Spoiler alert: it wasn't close. We smiled politely and went on about our meeting. He stuck around for a few months, and right after attending our organization's annual writing conference, quit coming. He represents many aspiring writers. They appear like a bright star of enthusiasm and fade quickly from our midst. The work becomes hard. Their egos turn into the kraken and won't let go.

At some point, the ego must back off.

I've been listening to the Anne of Green Gables series with my granddaughter. We're on the third book, Anne of the Island right now. In the chapter we listened to this morning, Anne decided to write a short story and sell it to a major magazine. A college classmate had done that, and Anne knew she could write a better story and sell it to a bigger magazine.

Anne wrote her story. Then she asked her best friend and a well-respected, elderly neighbor to read it. She told them to not hold back with their feedback. She could take it.

You see it coming, don't you?

Rather than accept their constructive feedback, Anne did what so many aspiring writers do--defended her writing. Her friends attempted to make a few more helpful suggestions, but when Anne met each one with a heated defense, they backed off.

She believed her story perfect. She submitted it to a major magazine.

Their rejection flew back to her as if on wings.

Dejected, she relented to send it to a lesser magazine, the one that published her classmate's story.

The rejection came so fast, she suspected they hadn't read the story. FYI, they probably hadn't read the entire story. If the first page of a submission has significant issues, agents, editors, and publishers won't waste their time reading the rest.

At this point, Anne denounced her writing career. She let her ego stop her from succeeding.

I'm sure, Anne will learn to accept feedback and see it as helpful and good advice. From the first two books, I know she's a person driven to write. The compulsion will eventually reel her back in. She'll release the ego-kraken again.

Which brings me back to the writer's ego. In order to bare our souls on the page, we must let our ego soar. In order to improve those stories, we need to stuff our ego deep into a dark place long enough to recognize good feedback when we hear it.

Many people submit their stories, show up at writing conferences, or join critique groups anticipating massive adulation for their work. Odds are, if they've never gotten constructive feedback from people who know something about writing, they're in for a shock.  In Anne's case, she was lucky. Her friends did give her useful feedback. Typically, friends and family aren't your best choice for unbiased opinions of your work.