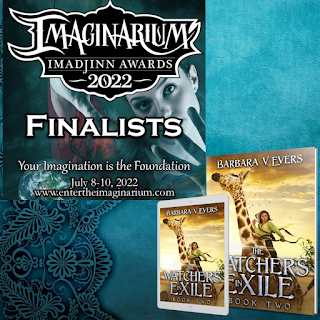 Woohoo! THE WATCHERS IN EXILE is a FINALIST in the Imadjinn Awards, and the winner will be announced at the Imaginarium Convention in July! Last year, the first book in the trilogy, THE WATCHERS OF MONIAH, won the Best Fantasy Imadjinn Award, so I'm excited to be a finalist again.

You can watch my Facebook Live announcement and please forgive any flubs. It's not always easy going live--even for those of us who are accustomed to appearing live.

On to other news.

There's still time to vote for THE WATCHERS AT WAR in the Palmetto Scribe Awards, a part of the Atomacon convention in May.

I have my schedules for JordanCon and Atomacon and will be sharing them next week, or you can find them on Facebook this week.