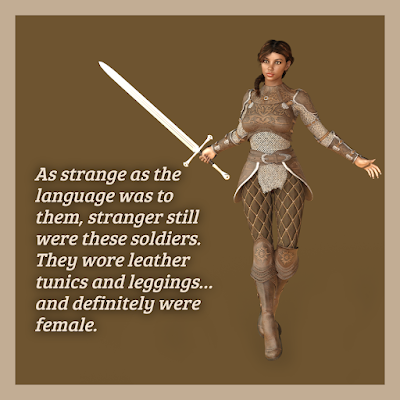 Today is Watcher Wednesday, so I thought I'd share a snippet of the first time Micah and Donel encounter the Watchers. Readers of the story already know these two men came from the north on a journey and never left. Here's their first encounter with anyone living in the four kingdoms.

Olaf the Memory Keeper tells this story after Adana begs him to during a picnic in Elwar. Here's a short section of that story.

A few days later, Micah and Donel reached the cave.

“The trapper cautioned us to stop here for the night,” Micah said, calling Donel back to the cave.

Donel stared into the valley below. “It’s only mid-day. And look, it’s downhill from here. He probably expected us to reach this cave during a rainstorm.”

The man had a point. For the first time in four days, the sun shone on them, and only a few distant clouds gathered on the horizon. Micah’s clothes felt almost dry, so he agreed and followed Donel down the path.

The error of their decision became clear soon. The path turned steep, rocky, and slippery, making the descent to the valley floor a longer, more difficult trek than expected. With only a few hours of daylight left, they decided to return to the cave.

Neither man noticed the gathering clouds until the first few drops of rain splattered the path. As if on cue, the wind rose, and rain pelted them.

Donel grabbed for a nearby tree, barely bigger than a shrub, trying to maintain his stance against the mountain’s riverlike onslaught. He grasped Micah’s arm and pulled him beneath the tree. The two peered up the hill, streams of rain washing over them.

Micah searched for signs of the cave above, but visibility was limited. He studied the steep ascent, eying the few stalwart trees along the treacherous path. “Do you think we could pull ourselves up by those trees?”

Donel turned and studied the mountainside. “If they can withstand this storm, surely they can hold us.”

Despite his inclination for baked goods, young Donel was fit and muscular. Often the champion in wrestling matches, he enjoyed a quiet grace of motion and could catch his opponents unaware with his swift moves. If anyone could scale the slope in these conditions, it was Donel. Micah was several inches taller, with a leaner build. His strength lay in his quick mind and the trust people placed in his bright blue eyes which shone in contrast to the grime now streaking his face.

Leaning into the wind and rain, they tied a rope around their waists.

Donel pulled his ax free. “Maybe I can dig it in deep enough to keep us from sliding away.” Before he ducked out from underneath the bush, he turned to Micah and said, “I’ll give two tugs on the rope when I’m ready to pull you up. Whatever you do, don’t slip. We’ll end up at the bottom.”

They inched upwards, slithering and lunging for any possible handhold. Water ran down their backs and churned the path into a slick mess. Finally, they reached the last tree, but the path above them was gone, washed away, leaving a vertical cliff to the cave above. Both crouched under the tree, studying this new obstacle.

“If you climb up on my shoulders, do you think you can reach the top?” Micah said to Donel as he untied from the rope.

Micah braced against the tree and gave Donel a hand up, trying to maintain his balance while the other man writhed on unsure footing.

Olaf staggered under the tree, holding imaginary feet on his shoulders. He turned his head toward the sky and shouted.

Micah clenched his jaw, digging in his heels.

“What the—” Donel exclaimed, and Micah stumbled from the sudden absence of weight on his shoulders.

He turned to stare up toward the cave. When Donel’s round face did not appear over the edge, Micah called, “Donel? Are you alright?” Thick rain drops pattered on Micah’s face and the leaves in the silence.

Olaf held his hands out in a gesture of confusion. Worry creased the storyteller’s face.

Exhausted and wondering if he could climb to the top on his own, Micah leaned against the tree. As he breathed heavily and tried not to succumb to frustration, the rope’s end tumbled back down the bank. With relief, he secured it around his waist and tugged it, gasping as Donel yanked him up and over the ledge.

Olaf flung his body to the ground and shook his head in confusion. He continued the story while pantomiming out Micah’s next actions.

The rope fell slack when Micah landed on the ground outside the cave. He rose to his hands and knees, bent over trying to catch his breath.

The soft leather of a small boot edged into his vision. Micah shot backward and groped for a knife. Donel sat on a rock eying two young soldiers guarding him at sword point. A soldier grabbed Micah’s arm and shoved him against the wall in the cave.

Ten soldiers, close in height to Micah, surrounded them. One spoke. The two men shook their heads and wondered whether excitement and adventure was a good thing. As strange as the language was to them, stranger still were these soldiers. They wore leather tunics and leggings…and definitely were female.