The Imaginarium Convention 2022 is in the books. As I told you last year, this conference offers so much excellence, camaraderie, and encouragement to the creative community that I feel blessed to have found it last year. I'm doubly blessed to be invited back this year.

Special recognition must go out to Stephen Zimmer and Holly Phillipe, the brains, backbones, and muscle behind this amazing event. Last year, I met Holly and Stephen in person and made friends with so many of the Imaginarium family. It was great to catch up with them. They seemed as thrilled to see me as I was to see them after an entire year's separation. There were new faces this year, and I enjoyed meeting the participants who came to my workshops (shout out to the loyal ones who stuck it out for my 3-hour character development workshop and the determined writers who let me talk grammar as well as other submission error issues on Sunday morning).

If you're looking for a writing conference that offers something for screenwriters, filmmakers, authors, poets, actors and more this one is chock full of lots of opportunities to learn from each other. In case you're wondering, it's not just for speculative fiction writers. Plus, the attendance and interest in the workshops and panels exceeds what I've seen at most conventions. That doesn't happen at a lot of cons.

Besides two workshops, I moderated a panel on character conception with authors and artists such as Sandy Lender, Lynn Hansen, Michael Williams, Aaron Drown, and Arlan Andrews. Here we are during and after the panel. Obviously, Sandy said something that made the women laugh, but the guys either missed it or didn't get the humor. Oh well. The most obvious point from this panel? No matter how you get there, you need to create  three-dimensional characters. Sometimes that's easy. Sometimes it's not. 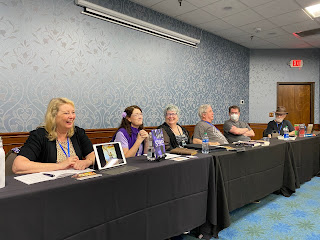 Also on Sunday, I sat on a Writing Mountain Medicine panel moderated by William Joseph Roberts (Hillbilly). I volunteered for this one because my upcoming series does use natural remedies, and I was curious to interact with the other panelists. I took a LOT of notes from lifetime naturalists like Hillbilly, Kathy L. Brown, and Josef Matulich. Michael Faciliani joined us, too, because he created his own world's herbology which in itself is an amazing feat. I foresee more research in my future, but that shouldn't be surprising. All writers must research their topics to be sure the details (even the made up ones) ring true to the reader. Alas, I don't appear to have a picture of this group.

My other panel involved discussing the benefits of writing groups. There are as many ways to run a writing group as there were panelists for this one. If you want to know more about the writing group I ran for South Carolina Writers' Association, I have several posts here.

In case you're wondering, yes I did sit in on the taping of a podcast, Back of the Cereal Box, and attended a workshop, Mock Writers Room.

The podcast fit Saturday morning with 80s culture and cereal tasting. Silly fun. I joined in during the game, but you don't see me on screen.

The Mock Writers Room workshop blew my mind. I don't plan to start screenwriting, but I learned a lot about how the process works. We mock planned a second season for Firefly, and I wish we could see it come to fruition. I'm impressed with how well James led this workshop and glad I got to participate with writers whose creative bent IS screenwriting. For those of you who've never had the opportunity, let me just say, the writers room lives in frenetic energy and brainstorming. It's a sink or swim kind of environment. James did NOT run it that way, but he gave us a glimpse into the realities of this creative world.

I only caught one or two of the films screened this past weekend, a fact that disappoints me greatly, but there's only so much time in the day. Every person I spoke to raved about the workshops and panels and all the great information and networking they experienced. It's truly a fun, family event.

Oh, and one more thing that sets the crowning glory on the weekend. The second book in my epic fantasy trilogy, The Watchers in Exile, won the Best Fantasy Novel Imadjinn Award at the awards banquet Saturday night! 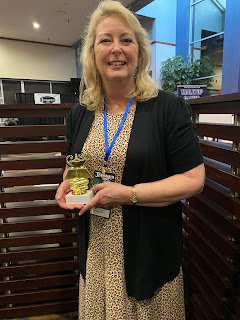 The first book in this trilogy, The Watchers of Moniah, won last year, so now I have bookend awards. I'm so honored to win a second time and thrilled that two of my dinner companions won their awards too--James B. Fox for Best Science Fiction Novel and Lynn Slaughter for Best Young Adult Novel. We had a winning table that night! 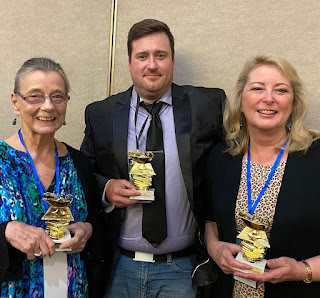 If you haven't figured it out, I highly recommend the Imaginarium Convention in Louisville, KY. Tell them Barbara, the giraffe lady, sent you.