My Day as a Crazed Race Car Driver 😉 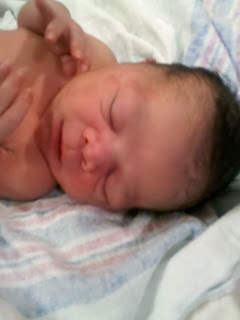 Today, my grandson turns 11. Every year, on his birthday, I can’t help but think about the day he was born. I wrote this post a few days after his birth that year, and I thought I’d hold off my post this week until today in honor of his birthday. (I have added a few more details, too.)

Picture this:  a white mini-van ignoring all traffic rules, roaring along Atlanta's I-285, weaving and zipping between lanes.  Who was that stupid driver?  Me!

But let me explain:

"Are you going to the hospital now?"

"No, I've got time.  Just get here as soon as you can.  The contractions are too strong for me to drive.  I need you to take me."

No problem. Right?  Wrong!  My daughter lives three hours away.  AND, at that very moment an insurance adjuster crawled over my roof assessing the damage from a microburst storm that destroyed our siding, roof, and deck. So many homes suffered damage, so I’d waited two weeks for this appointment and couldn’t afford to reschedule it.
After gaining her promise to call an ambulance if things got too close, I urged the adjuster to hurry and then hit the road. He was quite understanding, fyi.

When I say I hit the road, you have to realize that it was Friday, July 1, the first day of the Independence Day weekend.  Highway patrol lurked in hidden spots along I-85 ready to nab drivers stupid enough to speed on a holiday weekend.

My body strained to fly, but I squashed that urge for the first two hours.  Once I hit Atlanta, I floored it, weaving in and out of traffic like a crazed race car driver.

4th of July holiday traffic clogged the six lanes ignoring my hazard lights, horn blowing, and flashing headlights.  I swerved into the far left lane only to get stuck behind a little old lady driving a Chrysler 3000 well below the speed limit.  I honked and flashed and beeped to no avail.  The drivers in the lane to my right flew by, unwilling to make way.  When I finally did get over, I ended up behind another Chrysler 3000.  What's the deal Atlanta grannies?  Drive 50 mph in the right lane, or better yet, get off the interstate.

After a quick stop to pick up the baby's father, the trip went a little better. We approached the exit stuck in the far left lane. He hung out the window flagging people aside.  This is the part that really terrifies me when I think about it.  I have no idea how I got to the exit ramp.  None of the cars would let us over, and I know I overshot the exit, but I got over somehow.  I'm pretty sure I blacked out during that part.

After running several red lights, we reached the house.  My daughter's partner scooped her up and carried her to the car. I grabbed my four-year-old granddaughter and her car seat.
My car screeched up to the Labor and Delivery entrance at 12:55pm.  My grandson, Amari, entered the world just 32 minutes later!
So, if you happened to have spotted a crazy lady racing a white mini-van like a deranged soccer mom on Friday, July 1, I make no apologies, just the admonishment that you don't mess with this grandmother!

Added 7/1/2022
Many people who don’t know my daughter have asked why she didn’t take a cab. Were Uber or Lyft even an option in 2011? Not sure, but she didn’t have cash or a credit card. It wasn’t as simple to do that for her as it is today. Also, she refused the ambulance because they would not take her to the hospital she wanted. Believe me, I tried to talk her into it, but have you ever tried to reason with a woman in hard labor?