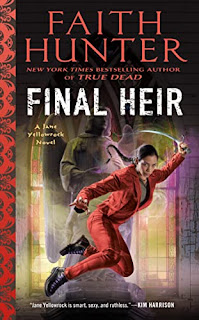 Yesterday, Faith Hunter, one of my favorite authors, released Final Heir, the final book in her Jane Yellowrock series. I've blogged about this series before and about Faith, so I wanted to share this milestone with you.

The End of a Series

I saw Faith at a writers' conference right before COVID shut us all down. At the time, she was working on the fourteenth book and told me there would be fifteen in all. Final Heir is that fifteenth and final book. (If that's not enough, there are several short stories and novellas in the series, too!)

I haven't read it yet, but it's on the top of my TBR list. I always read Faith's books soon after they come out. They're that good. She could take several directions with this story of the vampire hunter who ends up working for the vampires--if you haven't read the series, I don't want to say more than that here. So much can happen in fifteen books, and I'm sure many of her fans have their own speculations about this final book.

An Author Who Helps Writers

I met Faith in 2007 at a writing conference. She was kind and helpful and realistic in talking to the writers in her sessions. She had a cold that weekend, and I had a homeopathic remedy that helped her. Thus began our friendship. Because I helped her, she offered to help me. At the time, I had written 50,000 words in what would eventually become The Watchers of Moniah. I had never gotten that far in a book before, and I worried I might lose momentum. Faith offered to kick my butt to keep going. She left the responsibility up to me, but she became available.

Of course, I bought every book she had out at the time! The first Jane Yellowrock book came out in 2009, and I've read each one within a week of its release. One of them, I don't recall which one right now, I read in one afternoon. (I kind of blew off work that day.)

All of Faith's books are works of art with intriguing plot lines and mismatched people becoming friends. Jane Yellowrock is a shape-shifting vampire hunter who gets hired by the Master of the City of New Orleans (a vampire) to hunt down rogue vampires. From hunter of all vampires to employed by high-ranking vampires, Jane struggles to adapt to her changed role. Over the series, she becomes more and more enmeshed with the vampires and many other mythical characters. Jane gathers misfits around her and turns them into family.

And of course, there's Beast, the mountain lion who shares Jane's body. If you haven't read this series, that story line alone is worth the read! Yes, if you're wondering, I studied how Faith writes Beast as I wrote the giraffes into my trilogy.

A Series Worth Celebrating

And the last book, Final Heir is now available. What are you waiting for? Go buy it!