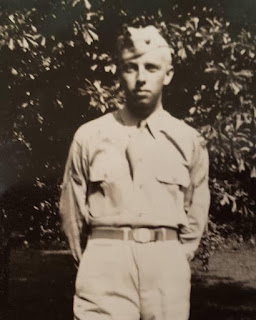 I thought all men’s legs looked like that—harsh crevices outlining the muscles, puckering around the edges. Long gashes ran down his thighs, the shape of a huge eye to my youthful imagination.
I stared at them, not because they were unusual, but because they were at eye level.
Dad stood at the bathroom sink every morning, the scrape, scrape of his razor rasping away his overnight beard growth. Water trickled in the sink, swishing when he rinsed.
I sat on the floor or on the cool edge of the tub and watched the foamy white cream disappear behind each stroke.
His legs were not my focus, but children see what’s at eye level, soaking it in. I saw Dad’s legs.
Confirming my belief that Dad’s legs were normal was the balance between each limb. The symmetry of the scars gave them permanence.
I accepted those legs as sculpted and muscular. Not the ravaged remains of skin grafts after a bomb in France blew up beside a young soldier. War warranted a brief mention in my childhood years, the reason behind Dad’s missing finger. I imagined his finger shot off while he peered over the edge of a dirt embankment. I was much older before I learned the truth. That my father, six months into his stint in the war, experienced the unfortunate luck of escorting prisoners when a bomb exploded next to him. I can still see the look of wonder on his face when he told me that those same German prisoners carried him to safety after the explosion.
Dad was nineteen. He spent the rest of his life missing a finger, living with tinnitus, carrying shrapnel around in his shoulders, and standing on the most beautiful legs I ever knew a man to have.
Later, when I noticed other men’s legs, I knew the difference. I realized the beauty of the surgeon’s renderings saved my father’s life, grafting skin where he needed it more.
To me his legs represented what was normal and, with my growing awareness of their true meaning, beautiful. I don’t know if Dad ever realized how I saw his legs, but the daughter in me hopes that somehow he felt my innocent acceptance as a blessing.
This essay appears in:
The Petigru Review, Vol. 7.  Editor Tibby Plants. South Carolina Writers’ Workshop, 2013, 125-126.
This post appeared in my blog in 2014.
family holidays Veteran's Day