Last week, I covered 3 comma usage rules. I'm going to follow up this week with three more comma rules, but before I do that, I want to share a cool contest with you.

You have a unique opportunity to enter for a chance to
WIN 6 signed copies of blockbuster books by
myself and 5 other authors,

and TWO people will win!

Here are the details: 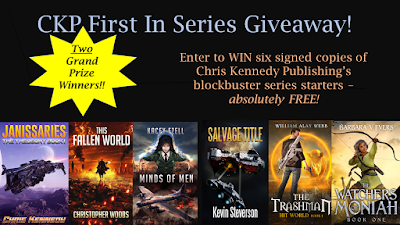 Now back to commas...

Turning toward them, the commanders' faces registered confusion and curiosity.
In this sentence, the introductory phrase is "Turning towards them." This kind of phrase transitions the reader from the previous sentence to this one and makes the writing less choppy. Since "turning towards them" is not the main clause of the sentence, it is introductory. It contains a verb, but it doesn't have a subject, so it's an introductory phrase. The comma comes just after this phrase, just before the main sentence clause.

When the other commanders turned, their faces registered confusion and curiosity.
In this sentence, the introduction has a subject (commanders) and verb (turned), and it introduces the main clause of the sentence (their faces registered confusion and curiosity). It's considered a dependent clause because it can't stand as a sentence by itself. We place a comma at the end of the introductory clause, just before the main sentence clause.
2. Use proper punctuation to integrate a quotation into a sentence. If the introductory material ends in "thinks," "saying," or some other verb indicating expression, use a comma and quotation marks.
Quotation = spoken or written words repeated verbatim in writing
Introductory material/verb indicating expression = a dialogue tag. It let's us know someone is speaking or quoting someone else. Words like said, asked, whispered.
Quotation marks = " "
I see a lot of mistakes with this one. Let's take a look.

“Everyone in the four kingdoms knows she's their queen,” Kiffen said.
In this quote, the dialogue tag comes at the end (Kiffen said). The first part of the sentence is dialogue, so we need an opening quotation mark, the first letter capitalized, and the rest of the quotation. Because the dialogue tag appears after the quote, we use a comma and a closing quotation mark to indicate the end of what was said. We don't put a period here because the words "Kiffen said" are part of the sentence.

Kiffen said, "Everyone in the four kingdoms knows she's their queen."
In this version, we get the dialogue tag (Kiffen said) first. We follow it with a comma + a space + the opening quotation mark. The sentence of dialogue is still capitalized because it's the first word of the spoken sentence. At the end of the quotation, we place a period and a closing quotation mark to indicate the end of the sentence.
This can be confusing until you get used to it. I wrote a more detailed post on punctuating dialogue awhile ago:  The Basics of Dialogue Punctuation
3. When writing a list of three or more items, separate the items using commas. For the last item in the list, use a comma and the word "and" or "or." 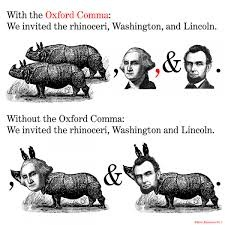 Imagine for a moment we didn't have the commas in this list:

THAT, my friends is a totally different message. One means you like your family and dogs; the other means you cook them. Yikes!

The big argument centers around the oxford comma, the comma before the "and," also known as the serial comma. Some style guides (AP) don't require the oxford comma. Others do (Chicago Manual of Style). In some cases, you won't run into any misunderstandings if you don't use the last comma.

We went to the store for apples, oranges and bananas.

But let's look at some issues where the oxford comma becomes essential:

Why don't you sit with Jane, the jokester and the cat?

Without the oxford comma, we can interpret this to mean Jane is the jokester and cat! Jane might not appreciate that. Here's another example.

I enjoy talking to my parents, God and Mrs. Smith.

This sentence could be misinterpreted as stating my parents are God and Mrs. Smith. We can recognize the author's meaning with obvious examples like God, but what about this one?

I enjoy talking to my parents, Joan and Simon.

Again, there's a raging debate over this. (Here's an argument that led to a costly lawsuit.) I prefer to use the oxford comma. Publishers and academia use the Chicago style which requires the oxford comma. If you're a news reporter, the AP style doesn't require the comma.

Which do you prefer?

If you can master these three rules and the three from last week, you will be ahead of the pack on comma usage.

Which means you have time to enter the contest and read!

Questions? Leave them in the comments.