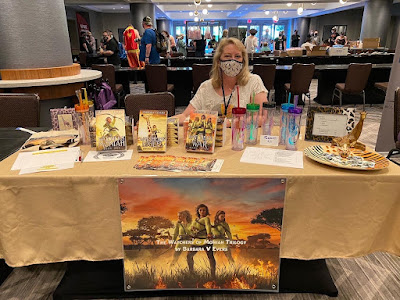 Wow oh wow! JordanCon sweeps you away with the fans' enthusiasm for The Wheel of Time (WOT) series, especially with the  first season of the TV show on Amazon. I wish I could have spent more time attending panels and participating in the conversations about the Dragon Reborn, Aes Sedai, Aiel, Warders, and everything WOT. 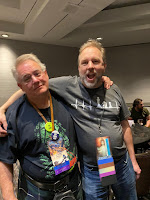 If I tried to list everyone I came into contact with, I'd miss someone, so forgive me for not doing so. It was so great to see so many familiar faces in my writing tribe and meet new WOT fans. The organizers of JordanCon deserve huge accolades for the successful weekend. Having run a large writing conference in the past, I know all of the moving parts are hard to keep steady and advancing forward. Thanks to everyone on the JordanCon team, including volunteers, for doing just that!

Also, I'd be remiss if I didn't thank my friend Suzie for manning my table when I had to be elsewhere. And some of you bought her fantastic tumblers! Woohoo!

One of the most interesting panels I participated in was The New Turning of the Wheel: Discussing Episodes 101 & 102. I shared this panel with four others who I believe read the books much later than me as opposed to when they came out. (Not a difficult guess there, since I was the oldest on that panel by far.) I started reading the books in late 1991 early 1992 when The Dragon Reborn came out. Everyone expected a six book series, so with three books available, I felt comfortable starting something new.

For those of you not in-the-know, WOT became a 14 book series with a prequel and 2 companion books. Jordan died before finishing the series (a fear every author holds in their heart), and his widow selected Brandon Sanderson to complete the last three books. The final book, A Memory of Light, came out in 2013.

Back to the panel, the other panelists were podcasters who create content centered around the WOT, and I've already subscribed to their shows and followed them.

I'll admit, I was a bit concerned about holding my own with podcasters and YouTubers who spend their creative energies centered on WOT, but I think I did ok. Kritter, did a great job of making sure each of us had opportunities to share, and we focused mainly on what we did like about the TV series as opposed to tearing it apart. I learned a few things from some of the audience that I hadn't realized before, so now I need to go back and watch these episdoes again. Oh darn. 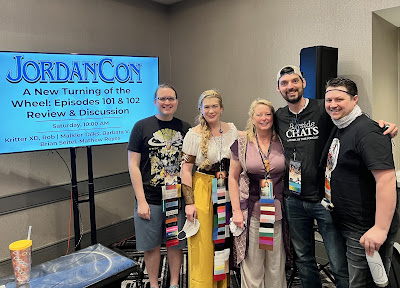 This panel is in the photo above. From left to right: Matthew Reyes (presence on Twitter of Time), Kritter XD (YouTuber & Moderator), Me, Brian Seitel of Barside Chats, and Rob of Malkier Talks.When not in Author's Alley, I participated in a few other panels: Mixed Medias, Writers' Groups, and Friendships and Found Family.

I met a lot of fans and writers and now have a lot more books I need to read. Don't worry. Reading fantasy is research for fantasy authors. It won't get in the way of finishing my next book. 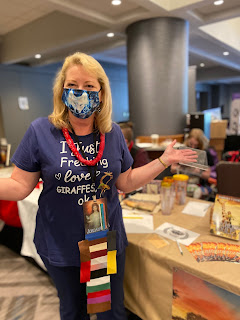 I experienced two milestones during this con. First, Vincent E. M. Thorn, who I met at CONJuration, walked up to my table with the full trilogy and asked me to sign the books. It threw me for a minute because this was the first person to buy the books somewhere else and bring them to an event for me to sign. That was really cool! The second experience was selling out of stock! By early Sunday, I'd sold my last copy of the first book,  The Watchers of Moniah. And people kept coming by after that wanting to get the book! That's always exciting as an author.

Thank you to everyone who came by my table. Below are some pix of me with various readers. For some reason, I failed to get costume pix, but they were amazing!

By the way, as an author  I was inspired by Jordan's WOT series and wrote a post about that last year. Check it out and maybe check out The Watchers of Moniah trilogy. 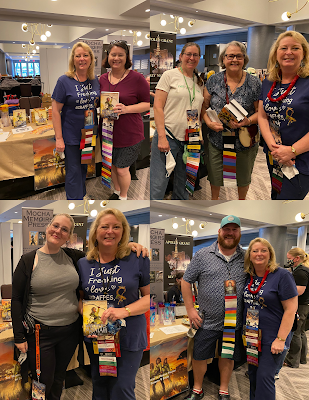