Getting Ready For JordanCon

This is my first year attending JordanCon, and I'm super excited. Why? These will definitely be my people. The Wheel of Time series inspired me as a fantasy writer. Prior to reading this series, I wrote contemporary fiction. I hadn't attempted to write fantasy . . . yet.

The more I soaked in the worldbuilding of this epic fantasy great, the more my imagination took off. Over time, a seed of an idea grew into THE WATCHERS OF MONIAH trilogy. Other authors and their series, of course, contributed to my muse such as the vivid storytelling of Melanie Rawn's Dragon Prince series and Sara Douglass' Wayfarer Redemption series. Images have stuck with me from all three of these series, but I believe The Wheel of Time inspired me the most.

I wrote about Jordan's influence on my blog last year:  How The Wheel of Time Influenced My Writing

Panels and Fun, Oh My!

So, of course I'm excited to attend this con.

For those of you coming to JordanCon, here's my schedule:

I plan to relish every moment of this fandom and will be set up with a table in Authors Alley, so please stop by and see me!

This is my first year at JordanCon, but the Facebook group clued me in on the importance of badge ribbons. I WILL have ribbons, and I would LOVE to give you one! 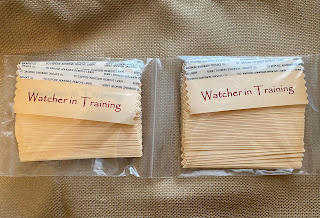 How do you get a ribbon?

Easy peasy, do one of these and you'll get a ribbon.

JordanCon will be here before we know it! Looking forward to meeting more Jordan fans!

I'm thrilled to announce that last week, I received great news about two of my books. In case you missed it, THE WATCHERS IN EXILE is a Finalist in the Imadjinn Awards and THE WATCHERS AT WAR is a FINALIST in the Palmetto Scribe Awards. 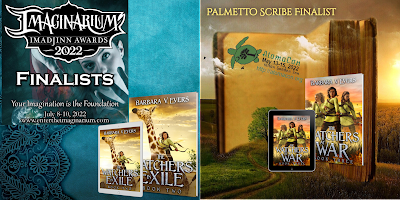 Until next time, steer clear of dark friends, the Children of the Light, and the dragon fang!