When Life Slams the Brakes 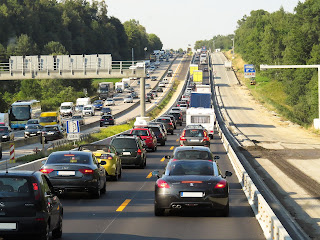 Remember my post last week? The one where I said it was hard to get things done? A few hours after I posted it, I had to slam the brakes on in my life. Yep, it's like my post managed to stop almost all activity in its tracks.

Wellllll, I didn't do it singlehandedly, but it's almost like a jinxed myself. Have you ever felt that way? Like you just put something out there and the mere suggestion tweaked your life for the next few days? Oddly, I do teach a concept to my corporate training clients called self-fulfilling prophecy, so there's actually some basis of fact based on the idea, but I'll tell you about that another day.

Anyway, this is a short and sweet post because things happened last week that put the brakes on. And I don't mean a gentle slow down. More like, you look up and see the car in front of you stopped, and you almost stand up while slamming the brakes down.

We're all ok. No one's sick or injured or anything horrible, so no worries please. It's nothing we can't handle. It's almost like life said: "Hey, you! You've got too much going on. I told you to stop, and you didn't listen, so I'm going to force you to stop."

"Woohoo," I responded sarcastically, followed by a, "Seriously?" And if I have to be honest, a good bit of whining. Hey! I'm human, too.

The massive train wreck of our lives last week has been cleared, and I'm moving forward. I will be posting again soon, but this is it for today.

Watch out for those brake lights in front of you!